CTC Prom Night: A Splash in More Ways than One 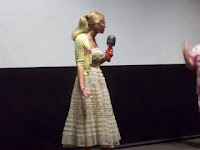 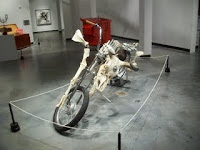 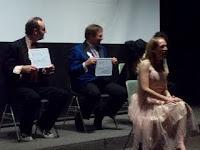 If you think there isn’t much culture in Wilmington, you haven’t been out in our fair city on a Friday or Saturday recently. Even when the worst weather hits, artists, musicians and actors are doing their “thing” and doing it well. Such was the case when City Theater Company (CTC) held its 2nd annual fundraiser, PROM NIGHT, last Saturday at the Delaware Center for Contemporary Arts. Sheets of heavy rain pelted the streets and a flood advisory was in effect in New Castle County. But it didn’t wash away the enthusiasm of the die-hard CTC fans and performers in attendance.

One of my favorites was a moment outside a high school principal’s office: For each new “student” that arrived, the ones already there were required to adopt the attitude of the newcomer. When serial-killer/cheerleader McElrone arrived, the other actors erupted into a chorus of “Oh My God’s!” and “finger”-waves. Davis’ nerdy attitude was terribly contagious after she spoke only a few words. Also amusing were Tietze, Burns and McElrone as they told a story in one-word increments in an Irish accent as “Professor Know-It-All”. Look for more off-kilter fun from CTC in their December production of Sweeney Todd, the Demon Barber of Fleet Street.

The Delaware Center for Contemporary Arts, with its quirky installations, is the perfect setting for an event like CTC’s PROM NIGHT. In the exhibit Kinetic, Dennis Beach’s Flow is a large acrylic pipe filled with swooshing water that surrounds the room. Lily Gottlieb-McHale’s sculptures with moving pieces and wires create eerie mechanical music in the room. Center stage is Billie Grace Lynn’s Mad Cow Motorcycle made from a cow’s skeleton and bike parts. What are you waiting for? It’s FREE!!