As a child of the '80s (1984, to be exact), I was pretty ‘psych’ed ('80s slang here is vital) to learn that Xanadu at CTC involves roller skates, Greek mythology converging with pop culture, and a whole lotta camp. Camp is good, as long as you know what you’re in for.  Come to the Black Box expecting an enlightening and Earth-shattering theatrical awakening — and this is definitely not the show for you.  But, if you’re ready for the ridiculous, over-the-top, so bad-it’s-good, spandex-y roller derby that is Xanadu, you’re in for a treat. Just be sure to bring your legwarmers (I’m actually not kidding. Donning '80s gear appears to be encouraged).

Xanadu marks City Theater Company’s last show in its 19th season and is based on the 1980 Olivia Newton-John cult classic movie of the same name.  The fluffy plot focuses on a Greek muse named Clio, played by the exuberant Jenna Kuerzi (last seen in December at CTC as Shelley in  Bat Boy: The Musical) who comes from Mt. Olympus to Venice Beach, California in 1980 on a mission to inspire the struggling — and comically suicidal — mural artist, Sonny Malone.  Sonny is played by the bright-eyed Billy Kametz, who steals the show with his charming Ralph Macchio physique, boy band-esque voice and “jorts”. (Yes, that’s jeans+shorts.)  Clio shares with her posse of Grecian muse sisters her plans to disguise herself as an Australian roller girl named Kira — complete with a horrendous accent — and appeal to the mortal Sonny in an effort to inspire his art.

Jealous sisters Calliope and Melpomene conspire to make Clio/Kira fall in love with doe-eyed Sonny and risk eternal banishment into the underworld by Zeus.  The two plotting sisters are played by the other two stand-out performers of the evening: The hilarious Dylan Geringer as Calliope who has all the comic timing of Kirsten Wiig (and pretty bitchin’ dance moves) and Ann Pinto, who boasts a killer voice, as Melpomene.  The most hilariously ridiculous moment of the show is when Calliope backs up her sister in the song “Evil Woman”...Both 'robot’ and ‘running man’ dance moves make appearances.  Need I say more?

CTC Producing Artistic Director Michael Gray directs this nine-person roller extravaganza (every part is double-cast with the exception of the primary leads), with musical direction by Joe Trainor and choreography by Dawn Morningstar.  Spatially, the stage is set up almost in the round, with a ramp dividing two parts of the audience and a raised platform in the front. A separate playing space is utilized to the left, all with columns and black cloth that are pulled to reveal the mirrored, shimmering disco — Xanadu — that Clio/Kira inspires Sonny to open.  The end of the show culminates in Zeus lifting Clio’s banishment and, you guessed it, the two lovers reuniting.  But not before Clio/Kira makes a grand entrance on a foam Pegasus pulled by a sassy attendant and the entire cast comes out on roller skates for a final dance party extravaganza. (Complete with a minotaur with pierced nipples.  Also, not kidding.)

Musically, the band was spot-on and the voices and harmonies were on point.  Additionally, the choreography was quite seamless; not an easy feat when the central character is on roller skates for the majority of the show.  Perhaps the most enjoyable element is that this show winks at its own ridiculousity throughout, even referencing its own double-casting and offering more tongue-in-cheek pop-culture references in one evening than one could possibly imagine.

In short, Xanadu is a whole lot of crazy and a whole lot of fun! Xanadu runs through May 11 at CTC's 'home', The Black Box at OperaDelaware Studios, 4 S. Poplar Street, on the Wilmington waterfront.  Tickets are available online at city-theater.org or at the box office on show nights, but cash or check only are accepted onsite.

See www.city-theater.org.
Posted by Arts in Media 3 comments:
Email ThisBlogThis!Share to TwitterShare to FacebookShare to Pinterest


The University of Delaware's Resident Ensemble Players (REP) ends its 2012-13 season with the World Premiere production of Fever, written especially for the REP by Theresa Rebeck. Ms. Rebeck, one of America's most celebrated playwrights and authors, is probably best known for creating the NBC drama Smash.

Fever takes place in a Midwestern bar where the owners, Laila (Elizabeth Hefflin) and Nick (Stephen Pelinski), are faced with a tough decision about the bar's future. Business has been steadily declining, but the bar has been in Laila's family for generations and the actual bar was hand carved by her great-great-great-grandfather, and she is struggling with the idea of selling the business.

Like most bars, this establishment has its regulars:
• Margo (Kathleen Pirkl Tague) the business woman who's good at what she does, but unhappy with
her company's male chauvinistic culture;
• Barry (Steve Tague) the loveable dimwitted man, the type that's always found sitting at the end of
the bar;
• Patrick (Mic Matarrese) the down-on-his luck guy who's trying to keep up appearances - show up
nightly to drink and chat.

However, our usual suspects' worlds change suddenly when a new couple, Irene (Carine Montbertrand) and Ned (Michael Gotch), dine at the bar one evening and begin arguing over the differing views of men and women, which then spills over into the regulars' conversation. The argument was pretty much standard fare: men feeling superior over women; women fighting to be taken seriously in relationships and the workplace.

The play's not groundbreaking, but it is enjoyable and humorous. It's like an extended episode of Cheers - a slim plot with a bunch of people arguing in a bar. The ensemble cast - which also includes Deena Burke as a broker looking to sell an important piece in the bar - does a fine job developing their characters. Mr. Tague was a particular stand-out. He perfectly captured the guy at the bar that everyone loves and who tries to keep the peace, but still manages to put his foot in his mouth.

The set provides the ninth character in the play. Scenic Designer, Anne Clark, along with the rest of the set crew designed a gorgeous bar. With its intricate carvings and beautiful curves, it does look as if it was carved in the 1800s. There are some FUN additions to the set that I won't give away, but before you leave the theater make sure you check out the bar's entrance/exit for a set piece that's not commonly seen in Delaware bars anymore!

Although the topics of sexism and "men are from Mars, women are from Venus" are familiar, maybe Ms. Rebek is trying to remind us that our society is still struggling with these issues and we need to continue the dialogue for improvement.

Fever at the Thompson Theatre in the Roselle Center for the Arts closes on May, 4. Visit www.rep.udel.edu or call 302.831.2201 for additional information and to purchase tickets. 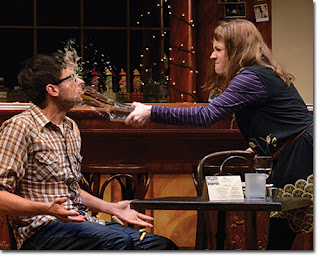 Posted by Charles "Ebbie" Alfree III No comments:
Email ThisBlogThis!Share to TwitterShare to FacebookShare to Pinterest

When classical music comes to the Delaware Art Museum, it's an event not to be missed. For the most recent Concert on Kentmere, the world-class Pyxis Piano Quartet graced the museum's main entry space, under a new (to DAM) piece of artwork, Paul Bocuse's World (1977) by Red Grooms. The wit and whimsy of the giant shadowbox-style piece, set in a restaurant kitchen, both contrasted the music and conformed to it -- the concert series is, after all, "where magnificent art and music come together.

If you're not familiar with the Pyxis Piano Quartet, they are a chamber music ensemble performing traditional and contemporary sonatas, duos, trios and quartets. On this night, the four immensely talented women -- Meredith Amado on violin, Jie Jin on cello, Amy Leonard on viola, and Hiroko Yamazaki on piano, performed three pieces: A duo on viola and cello, a trio on violin, cello, and piano, and, finally, a quartet featuring all four together.

The first two pieces were relatively obscure and contemporary, and classicly avante-garde. American Walter Piston's (1894-1976) Duo (for viola and cello) is an optimistic piece laced with distinctively American half-steps. Russian Dmitri Shostakovich's (1906-1975) Piano Trio in e minor, Op. 67 is a haunting an complex tale of sorrow and hope, written in 1944, with references to Soviet oppression, the discovery of extermination camps in Poland, and the recent death of a friend. The powerful piece, in turns dark and folkishly upbeat, was a highlight of the evening.

The final piece was more well-known: Piano Quartet in g minor, K 478 by Wolfgang Amadeus Mozart (1756-1791) is chamber music at its finest, with an interesting backstory. The piece, written in a couple of days by Mozart for a paycheck, was a failure initially -- it was simply too complicated for the amateur musicians who played chamber music at home with friends for entertainment. Eventually, in the hands of more skilled musicians, it became one of Mozart's most beloved pieces of chamber music.

While visiting the museum for the concert, be sure to explore the open gallery. On this evening, guests could experience the wonderful State of the Art, Illustration 100 Years After Howard Pyle, featuring some of the most revered illustrators in contemporary art. 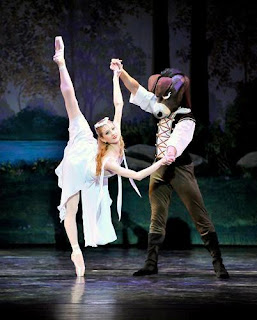 Although this production closed, make sure you purchase tickets for FSBT’s next season. For more information visit www.firststateballet.com and to learn more about the “Year of the Bard” festival visit http://inwilmingtonde.com/events/yearofthebard.
Posted by Charles "Ebbie" Alfree III No comments:
Email ThisBlogThis!Share to TwitterShare to FacebookShare to Pinterest

Delaware Arts Info recently sat down with "newcomer" Dennis Lawson, the new Executive Director of the Newark Arts Alliance.  And, we say "newcomer" with tongue in cheek — Dennis has been a fixture on the Delaware scene for some time, previously holding a position at the Delaware Art Museum before leaving to complete an advanced degree.  Here's a little Q&A we enjoyed with Dennis upon his return to the Delaware arts world...