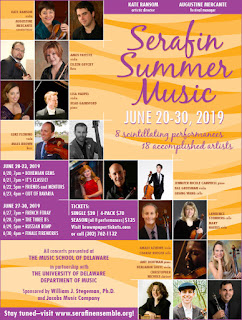 Posted by Arts in Media No comments:
Email ThisBlogThis!Share to TwitterShare to FacebookShare to Pinterest
Labels: Delaware Division of the Arts, Governor's Awards for the Arts 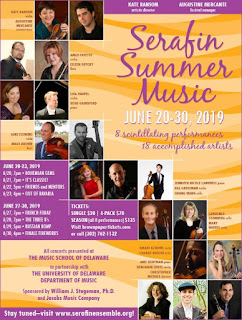 Festival artists hail from China, the Philippines, New Zealand and from around the U.S., including New York City, Oklahoma, Ohio, Kentucky, Atlanta, Florida, Pennsylvania and right here in Delaware.

“Bringing superb artists together to prepare and share marvelous masterworks with a community of eager listeners is a thrilling creative enterprise in every respect,” comments Kate Ransom, Festival Artistic Director.

The festival’s exceptional lineup features a range of repertoire including works by great classical composers Beethoven, Schumann and Brahms, as well as works by lesser-known composers, such as Smetana, Khachaturian and Faure. Each concert has a unique theme and ensemble configuration of up to six string, wind, piano and vocal performers.

All performances will be held at The Music School of Delaware's Wilmington Branch, 4101 N. Washington Street in Wilmington. Season subscriptions are $135 for all eight performances; a four-pack of tickets is $70 and single tickets are $20. Purchase by visiting www.brownpapertickets.com or calling 302.762.1132 (the Music School).