Jeffrey Manns has taken on the daunting role of assistant conductor of the Delaware Valley Chorale while David Christopher is on leave and he is putting all of his energy into the task. The concert began with a haunting organ solo of O come, o come Emmanuel. The fifteen male choristers were in position as the ladies marched forward from the back of the church to join them. The antiphonal echoes in Terry Schlenker’s arrangement sometimes made it appear that various sections were starting a beat late. Schlenker’s arrangement of Let all moral [SIC] flesh keep silence had some very interesting effects with parallel fifths which evoked an intriguing oriental flavor. The organ bass line helped guide the male singers in their fugue but the high pitches from the sopranos were a bit shaky. Of the father’s love begotten went more smoothly as the choir settled in, but the final phrase by Gus Mercante came out far too loudly.

In the bleak midwinter featured Fa Lane Fields’ pure yet fully rounded soprano voice which carries well and yet retains the delicacy of a child’s voice. Lloyd Shorter’s English horn and Kimberly Doucette’s strong soprano voice had no trouble standing out above the chorus, organ and piano in Maurice Besly’s The shepherds had an angel. Witnessing the magic of laser-like musical focus by Ms. Doucette and Mr. Shorter reminded me of what making music should be.

The Giovanni Gabrielli Hodie was ruined by the singers’ efforts to sing more loudly than they could comfortably manage. Kurt Collins’ brilliant organ accompaniment had sparkling glissandi and the brass chorale (George Rabbai and Jonathan Barnes, trumpet, Timothy Soberick, tenor trombone and Barry McCommon, bass trombone) had great verve, bounce and clarity. Organ and brass were allowed to show their lively musicality as soloists in the Gabrielli Canzona per sonare No. 4.

For me the highlight of the concert was the Daniel Pinkham Christmas Cantata. It was clear that Mr. Manns had focused all of his rehearsals on this difficult piece. The pitches were accurate, the diction was outstandingly clear and the dynamic he demanded of the chorus was soft enough to allow the muted brass chorale at the end of the O magnum mysterium to be heard as a whispering shimmer.

A Dose of Family Holiday Fun at Reedy Point

By Blogger Charles "Ebbie" Alfree III
The Reedy Point Players' production of holiday-themed one-acts, The Toys Gift & Stocking Stuffers, at the Delaware City Community Center is a perfect show for small children and their families. This unique production, directed by eight directors (seven of which are first-time directors and five of them under the age of 18), could even give Scrooge a little Christmas spirit.

Many favorite toys from our youth come to life during the magical production. Guess who's cheating on Ken with G.I. Joe and guess who is despised by the longing-to-liberated baby dolls? That's right...Barbie! I always thought she was to good to be true! Stuffed animals that come to life to make Christmas presents are also a lovely part of this program.

And what's a Christmas show without a few overworked elves and two underappreciated, surfer-dude reindeer? They all make appearances in the production, along with Uncle Sam, Cupid, the Easter Bunny, Ezekiel the Pilgrim & Hagatha the Witch. In one of the acts, the group of holiday icons come together to discuss their frustration with the most famous holiday icon, Santa. By the way, the "big guy" also makes an appearance, to the amazement of all the children in the audience. Between each act The Hahn Family is on-hand to perform Christmas carols and keep everyone in the holiday mood.

This production can warm hearts for kids of all ages. The show closes Sunday, December 18, For tickets ($10 for adults and $8 for students, seniors and active military), visit reedypointplayers.com or call 302.650.4054.
Posted by Arts in Media No comments:
Email ThisBlogThis!Share to TwitterShare to FacebookShare to Pinterest
Labels: Reedy Point Players

Have a Warm and Fuzzy Cartoon Christmas

'Tis the season for Christmas shows, all striving to capture that magic feeling that comes once a year. Few shows pull it off with as little packaging as The Cartoon Christmas Trio. For their 30 minute set, part of the Market Street Music Noontime Concert Series at First & Central Presbyterian Church, it was just three guys and their instruments -- no costumes, no glitz, no decorations. None of that is needed -- within the first strains of Vince Guaraldi's  "Skating," it's Christmas.

If you haven't heard Guaraldi's famous Christmas pieces, commissioned for the classic 1965 "A Charlie Brown Christmas" TV special, live and in person, it's worth experiencing. The Trio plays the songs just as they were written, giving audiences a dose of nostalgia and a certain appreciation for the music that may have gotten lost when watching the special as a child. When the Trio play it, it's anything buck background music: It's everything.

In addition to the Guaraldi songs, The Cartoon Christmas Trio does other songs from classic Christmas TV specials. At First & Central, they did a song from "How The Grinch Stole Christmas" with a jazz edge. The full concert includes songs from "Frosty The Snowman," "Rudolph the Red-Nosed Reindeer," and others.

If you missed The Cartoon Christmas Trio at First and Central or their first Iron Hill Brewery shows, there's still a chance to catch them before this holiday season is a memory: They'll be playing the Iron Hill in Newark on Monday, December 19, and The Iron Hill in Wilmington on Wednesday, December 21. For a complete calendar of their remaining shows in the area, click here.
Posted by Holly Quinn No comments:
Email ThisBlogThis!Share to TwitterShare to FacebookShare to Pinterest
Labels: Cartoon Christmas, First and Central Presbyterian Church 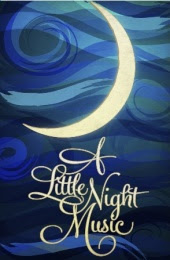 There must have been a reason to have the singers gather in front of the orchestra at the start of the show, but I couldn’t fathom it. With their backs to the audience, they got our attention and their abrupt turn to face us was like a curtain rising.
Michele Ferdinand dotted every I, t and quarter note in her musical direction and in spite of an occasional lack of clarity from the choral quintet, the attacks and endings of words and pieces was flawless. Michael Gray, who starred as the older husband and lover, codirected with Tom Shade. Gray’s singing, acting and comic sense was the backbone of the production. His young wife Anne, played by Dylan Geringer, was delightful. Her ability to reach the murderously high notes Sondheim wrote made her songs seem easy.
And where did all this talent come from? Casey Elizabeth Gill seemed to have walked off a Broadway stage. Her miming, playfulness and incredible voice were just plain knockout. When she sings her cynical yet vivacious Miller’s Son she runs the gamut of emotion and sound that emulates life’s ups and downs.
Karen Murdoch is, as the song says, perfect as the warm but conniving mistress who, in spite of it all, has warmth which will melt you after you are softened by the haunting clarinet introduction to Send in the clowns. Murdoch has that knack for a quiet coda that takes your breath away.
Dorien Belle’s bumbling Count Carl-Magnus Malcolm creates such a perfect foil for lawyer Fredrik. Their duet, It would have been wonderful had that magic timing that every musician hopes for – the courage to wait until that final microsecond with calm assurance.
Victoria Healy is a mistress of comedy – she, too, knows exactly how to time her punches.
The set was minimal, but with inventive staging, terrific choreography – fantastic opening scene of all the characters awakening, the transitions from house to theatre to backstage to country mansion worked with ease.
Production runs December 2 through December 17, with one Sunday matinee on Sunday, December 11, at 2:00pm. Closing Night is Saturday, December 17 with Closing Night Party at Extreme Pizza.
See city-theater.org.
Posted by Margaret Darby 1 comment:
Email ThisBlogThis!Share to TwitterShare to FacebookShare to Pinterest
Labels: A Little Night Music, City Theater Company, OperaDelaware
Newer Posts Older Posts Home
Subscribe to: Posts (Atom)