By Christine Facciolo
Hollywood has given us more than just great motion pictures. It’s given us a lot of remarkable music as well. Sometimes industry moguls would engage a world-renowned composer to craft an original score to accompany a film. At other times, they’d graft a well-known piece onto a particular scene.

The Delaware Symphony Orchestra gave concertgoers a sampling of both approaches on Friday, November 19, 2016 at The Grand Opera House in Wilmington. The program “Music from the Silver Screen” swelled with emotion and crackled with energy in works by Wagner, Korngold, Bernstein and Ravel.

Music and drama have shared a close relationship for ages, but it was Richard Wagner’s later musical style with its new ideas in harmony, melodic processes and operatic structure that had a major impact on modern film scores. So it was only fitting to open a program on movie music with a performance of the Prelude and Liebestod from Tristan und Isolde which is heard as incidental music in several films, the most recent being Lars von Trier’s Melancholia (2011).

The Prelude and Liebestod is about as romantic as music gets. Maestro David Amado led the orchestra in a performance that was swelling and strong yet never sentimental. One did not need to know the story to experience the trajectory of emotions: the yearning, the sadness and the hope.

The slow motion of the Prelude and Liebestod soon gave way to the electrifying energy of Erich Korngold’s technically demanding Violin Concerto in D Major. Korngold was an Austrian-born prodigy who, like other European composers fleeing the turmoil of the interwar years, found himself in Hollywood at a time when the industry was beginning to realize just how important a score could be to the success of a film. He would go on to win two Academy Awards, earning him the title of the founder of modern film music.

The concerto, which was composed in 1945, marked Korngold’s return to serious composition, even though the work “borrows” themes from his movie music in each of its three movements. Guest soloist was Jinjoo Cho, Gold Medalist of the 2014 Ninth Quadrennial International Violin Competition of Indianapolis.

One might be tempted to equate Korngold’s thoroughly romantic style with schmaltz, but Cho’s no-nonsense approach to his music quickly dispelled those notions. Her searing tone, high-octane delivery and splendidly taut rhythms showed she had a feel for the style his music demands. The audience responded by offering applause between each movement, rising to its feet at the conclusion.

Like Korngold, Leonard Bernstein was a serious composer who felt every bit as comfortable with musical theatre and film as evidenced by his Symphonic Dances from West Side Story. Amado and the musicians of the DSO spun over the jazzy Latin rhythms of the dance music just as they soared through the romantic lyricism of Tonight and Maria, all the while delivering the streetwise edge that gives the score its energy.

Like the Prelude and Liebestod, Maurice Ravel’s Bolero served as incidental music in several films, probably most famously in 1979’s 10. This driving, seductive piece never fails to delight audiences and tonight’s was no exception. The piece proceeded with understated elegance and flair, as several instruments took turns presenting the sinuous solo that goes through 18 repetitions. But special honors must go to Principal Percussionist William Kerrigan, whose snare drum maintained rhythm and tempo with utmost precision.

It is said that Ravel would became angry if he felt a conductor was losing control of the work. He would have been justifiably proud of this performance.

The Holiday Show for the Whole Family to Enjoy! 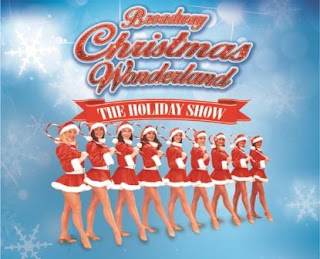 Broadway Christmas Wonderland: The Holiday Show at The Playhouse on Rodney Square is a true holiday treat for the whole family! From dazzling sets to sparkly costumes, the Christmas musical revue enchants both the young and the young at heart!

The show is full of holiday classics from all eras, including jovial songs like Jingle Bells and Santa Clause is Coming to Town to sacred Christmas hymns like Oh Holy Night and The First Noel.

Five amazingly talented vocalists (Daniel Dewes, Chris Giordano, Hannah Grover, Kadejah One, and Browyn Whittle) are backed by a singing and dancing chorus that bring the beloved carols to life. The talented cast high kicks us through a true winter wonderland that not only includes traditional holiday music, but also gospel and a Glenn Miller tribute, as well as an emotional rendition of God Bless The USA. This powerful number brought the audience to its feet.

A couple highlights include Jing, Jing, Jing, a highly energetic song the chorus sings sitting on the edge of the stage and performing a fast-paced patty-cake style dance and Smile With Santa, a sassy little number with the chorus performing a Fosse inspired routine.

Get into the holiday spirit by seeing Broadway Christmas Wonderland: The Holiday Show before it closes on November 27th! For more information and tickets, visit  http://www.thegrandwilmington.org.

"Gentlemen's Guide" Worth "Perusing" at The Playhouse

If you start with Agatha Christie and Downton Abbey, add in some Monty Python and Benny Hill, then mix it all thoroughly with fun music, talented performers and one of the most versatile sets to grace a stage, you'll get A Gentleman's Guide to Love & Murder, running now at The Playhouse on Rodney Square.

The Tony Award-winning play -- based on a 1949 film, which was based on a book published in 1907 -- is a delightful comedy centered around one young man's attempt to woo the woman of his dreams while systematically knocking off one relative after another to gain a title, a mansion and the family wealth.

Monty Navarro is played playfully by Kevin Massey, who seems to embody a young Danny Kaye as he moves around the stage, especially in a scene involving two doors, two women and an attempt to make sure the two women do not meet.

John Rapson delights the audience playing nine (yes, nine) members of the D'Ysquith family -- young, old, men, women -- Rapson changes costumes, make up, accents and personalities in seconds and as each family member is dispatched in a different way, we find ourselves curious as to what the next family member will look and sound like.
Kristen Beth Williams and Kristen Hahn play the dueling love interests of Monty with angelic voices and remarkable comic timing.

Rapson is not the only cast member who gets to play multiple roles: An ensemble of talent play townspeople,  wedding guests, mourners, servants, law enforcement and more throughout the play.

During intermission, several audience members expressed amazement at the innovative set, which takes everyone from church steeples to frozen lakes to gardens and at least a dozen other locations with the help of a giant video screen.

In the midst of the wit and fun of the production, there seems to be some subtle commentary on class divisions and how out-of-touch the wealthy and priveleged can be, but since the play is set more than a century ago, we can rest assured that simply applies to that era, not modern times. ;)

If you're up for a fun, engaging and delightful dish of entertainment, you'll want to reserve your seat for A Gentleman's Guide to Love & Murder.

A Gentleman's Guide to Love & Murder is at The Playhouse on Rodney Square until Sunday, November 20. Order your tickets HERE.

Pity the director that has to stage a production of Shakespeare’s Pericles, Prince of Tyre.

Dramaturgically speaking, it’s a train wreck. In fact, scholars agree that the play was largely written not by the Bard but by a collaborator — and a hack at that. The plot is a meandering one that includes an incestuous king, two tempests at sea, marauding pirates, a maiden sold into a bordello and a reunion between said maiden and the father who thought her long dead. And if that’s not enough, there’s also a reunion between that self-same father and the wife he also thought long dead. Little wonder it’s so rarely performed.

But for David Stradley, it was the perfect choice. Stradley is producing artistic director of the Delaware Shakespeare Festival, which is smack-dab in the middle of a statewide community tour that has already taken it to some pretty unconventional venues, including the Ferris School for Boys and the Sunday Breakfast Mission in Wilmington as well as the Stockley Center in Georgetown. The company is also slated to perform at the Delaware Psychiatric Center and the Baylor Women’s Correctional Institute.

It’s all about life’s journey and how we cope with everything life throws at us, Stradley told the audience prior to Sunday’s matinee performance at the Delaware History Museum in downtown Wilmington. Those who persevere will, like some of the characters in the play, reap the benefits. He noted how well that theme resonated with some of the at-risk populations the company has visited.

The plot goes like this: Pericles must flee for his life from the murderous King Antiochus. After being shipwrecked, Pericles finds his true love, the beautiful Princess Thaisa, who isn’t long for this life — or is she? The action spans fourteen years, but the ensemble, as omniscient narrator, keeps us abreast of Pericles’ hectic escapades throughout the Eastern Mediterranean.


Stradley tackles this omnishambles of a play with a cheeky production that features wit and zest. Ashley SK Davis supplies an amazing fight scene executed with precision by this acrobatic ensemble. David Meyer provides a minimalist set that supports the action but is portable and readily adaptable to the venue. Musician/composer Joe Trainer effectively set the mood, creating tension and underscoring the theme. Cast member Ruby Wolf’s violin provides a very pleasant, if unexpected, addition.

The performers are first-rate. Bi Jean Ngo shows versatility playing an oily assassin and the noble and sublime Princess Thaisa. Danielle Lenee imbues Helicanus with a quiet and stately grace. Ruby Wolf imparts a common-sense wisdom to the pluperfect Marina. Corinna Burns and J Hernandez are all grace and gratitude as Dionyza and Cleon which contrasts wonderfully with their turns as the Pandar and Bawd for which Hernandez dons an appropriately godawful red wig. Jamal Douglas as the titular hero must deliver a more restrained performance but does occasionally cash in on the silliness with revealing facial gestures.

Pericles, Prince of Tyre may not be a perfect piece of theater, but it’s good entertainment and it does deliver an important message of perseverance to anyone who’s ever been on the receiving end of one of life’s curve balls. And that’s most of us.