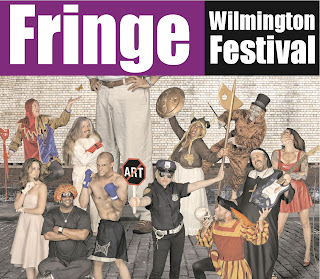 Wednesday night, again at the Queen! Although this time hubby and I are among the crowd enjoying the night of the Fringe Wilmington Performance Preview Party.  Among the many folks-about-town and dignitaries that packed the room of Upstairs Live, we were treated to the unique sounds of show starters, The Obsoleets.
The ensemble, armed with a musical arsenal that includes guitars, drums, an upright bass, accordion, mandolin, violin, erhu (although not tonight) and more, was made complete by the conspicuously placed and remarkably integrated new member, DJ Leon Barton.  It was, at first, an unlikely mix that ultimately made amazing sense.
Playing rare and period selections (think 1920s Bessie Smith), they fused the tunes with Leon’s subtle yet genius scratchwork, creating a fabulous—dare I say, fringy—new genre. What is it? Low country, bluegrass, folk? Our next-door tablemates said it reminded them of the New Orleans music scene. Whatever they call it, I want to hear more of it in Wilmo!
See www.obsoleets.com.
Onto the Performance Previews: There are more than 30 artists and 200 performances running at Fringe Wilmo now through Sunday, and each artist/group was able to give a 3-minute teaser of their performance at the preview. Some that struck my interest: A Contemporary Folk Evening with Flyground (Flyground, dance); One Word (MM2, dance); Dirk Darrow: NCSSI (Tim Motley, comedy/murder mystery); and No Diva Left Behind (Augustine Mercante, vocal & piano).  Check them out on the website and go get your fringe on!
In addition to main performances, tonight (Friday, September 23) there’s the Film Bros.’ Festival of Shorts at Theatre N; the Fringe 48-Filmmaking Competition; a Knights vs. Pirates Foam Sword Battle (ADULT & KID FRINGE?  awesome!) in Willingtown Square, Saturday, September 24, from 2:00-5:00pm, thrown by our pal DÉminence Grise; and of course, the Visual Fringe exhibition at the Chris White Gallery at Shipley Lofts.  Don't miss Fringe Wilmo 3.0!
See www.fringewilmington.com.
Posted by Arts in Media No comments:
Email ThisBlogThis!Share to TwitterShare to FacebookShare to Pinterest
Labels: Film Bros., Fringe Wilmington, Leon Barton, The Obsoleets

Cave of Forgotten Dreams is a Werner Herzog creation which is about the Chauvet caves. These caves were sealed off by a rock slide about 20,000 years ago so that when they were discovered by cavers on 13 December 1994, they were remarkably preserved. Some of the art in the caves is 38,000 years old. Herzog got permission from the French government to film the cave for this film which was released in 2010. Herzog narrates in fairly good English but also invites some French scientists and a perfumer who have accents that make them a sure winner for a Maurice Chevalier talk-alike contest. They were so laughable that I expected Peter Sellers to come on screen at any minute. The three dimensional photography of the caves is spectacular, but the broken English interviews is more absurd than any Pink Panther episode and the Herzog epilog was most puzzling.

Double hour (Doppia ora), 2009, directed by Giuseppe Capotondi, is a complex thriller about a hotel maid who meets a former policeman at a speed dating session. The two seem to click, but then events take a somber turn as they start their romance. Kseniya Rappoport emanates a waif-like character who is absolutely fascinating.

Another excellent film was Beginners – a poignant film which seemed to focus on homosexuality but in the end was a story about how to find, keep and live with love. Christopher Plummer and Ewan McGregor were excellent in their roles as classic American father and son seeking love from each other and from others.

The Trip, 2011, was a pleasant surprise to me – having heard that two Brits have a contest in sarcasm on a long trip to Yorkshire to eat good food; I thought I couldn’t stand it, but friends wanted to go and I was surprised at how good it was. Michael Winterbottom directs Steve Coogan and Rob Brydon (both well-known comedic actors in the UK) and gives them plenty of liberty to improvise.

The last film on the schedule was Trollhunter (Trolljegeren), 2010, was directed by Andre Orvedal. Made in documentary style, this film has some wonderful moments played as straight as an arrow: three billy goats on a bridge, government paperwork to fill out when a troll is killed and some spectacular trolls and special effects.

After the film, my friend Pam pulled out her hand troll puppet and let him greet the two guys dressed as trolls and waiting for the crowd to leave the last film of the festival.

Posted by Margaret Darby No comments:
Email ThisBlogThis!Share to TwitterShare to FacebookShare to Pinterest

A Week in the Company of the Queen: Live & Lots of Local

OK, this is way late for a post, but I couldn’t get these guys out of my head. So…here’s my summary of one week of music, featuring love for fantastic local musicians and props for the love being shown to them by World Café Live at the Queen (WCLQ).

Event #1: Open Mic Tuesday
I headed out with some gal pals to the 6:30pm performance at WCLQ (500 N. Market Street, Wilmo) and enjoyed earfuls of awesomeness that covered nearly every genre from musicians of every background.   Lead-off for the night was a performer who wowed us with an incredible 10-minute set of African drumming and song.  I wish I remembered his name, but when I find it, I WILL let you know!  Following him, the Mosaic String Duo of guitarists Chris Braddock and Doug Seth gave us a rousing performance and a tour around the globe with their original music.   Touching on Spanish, classical, even “bluegrassy” influences, they had the crowd clapping, cheering and whooping it up during their entire set.  I hope they make a return visit to Upstairs Live very soon!  Also amazing that night was WCLQ regular, pianist/vocalist Noelle Picara, who I heard performs for happy hour on Fridays Upstairs Live as well. 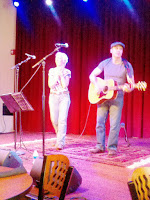 Event #2: Free Noontime Concerts
Another girlie pal and I met at WCLQ on a Friday afternoon for nosh (note: try the eggplant fries…YUM) and nuttiness from the ultimate “dork rock” duo, Hot Breakfast!  The pairing of Jill Knapp and Matt Casarino kept the packed room dancing in the streets…I mean, seats…for a great lunchtime break.  Their wacky set included songs like The Hole in Your Pants and epic covers of classic tunes from The Buggles (Video Killed the Radio Star) and Bonnie Tyler (Total Eclipse of the Heart).  This duo are as hilarious as they are talented…Yes, Breakfast is great for lunch!

Event #3: Six Voices, One Piano
My final trip to WCLQ was a benefit for the Delaware Breast Cancer Coalition.   It highlighted not only great vocalists, but also the continued benevolence of one in particular: Joe Trainor.  He organized the event and gathered a stellar line-up that starred Noelle Picara (who wowed us earlier at Open Mic Night), Leslie Carey, Brian Diltz, Gina Degars, Angela Sheik and Trainor himself.  The stark set and lone keyboard drew you in to their raw talent…wouldn’t it be nerve-wracking to perform just you and your piano?  Offering up both original music (Angela Sheik debuted a song called Good Year) and covers, their performances were effortless and soothing and powerful.   I know I’ve said this before, but I love to watch Joe perform.  He takes you on a emotional trip inside his own songs and practically transforms himself into whoever he’s covering---Billy Joel, the Beatles, you name it.  You’re really missing something special, in both talent and compassion, if you’ve never seen him.