Art & the Beach...What Could Be Better?

By Guest Blogger, Francine Stone
Francine is a Wilmingtonian whose passions include photography, theater, top-shelf tequila and a little guy named Finn. She lives in Bellefonte with her husband, Matt, and their Golden Retriever puppy, Finnegan. 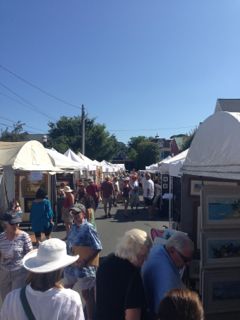 The St. Peter's Annual Art Show in Lewes is one of my favorite summer events. Every year, I look forward to this event, which is always held the first Saturday of July. Over 140 artists of every genre line the streets surrounding the historic St. Peter's Episcopal Church on Second Street. The folks at St. Peter's do a wonderful job selecting high-quality art and balancing the representation of various media via their juried selection process. The art on display is always beautiful, and collectors of all kinds can find something they covet.

The 47th annual show was held this year on July 6, and my mother-in-law and I headed out early to beat the heat. The artists for whom jewelry is a medium always capture my attention, so we made sure to visit the booths of our perennial favorites, Joy Davis (http://www.delawarebyhand.org/davis) and Anna Biggs (http://www.annabiggsdesigns.com).

As a budding hobby photographer, I was also taken by several photographers with stunning work on display. Gene Pembrook's travel photos (http://www.35slide.com) are breathtaking works that increased my wanderlust tenfold. I also loved Elisabeth Bard's nature photography (www.elisabethbard.com) — I found myself particularly taken with an intimate portrait of an angry Chickadee in the snow!

I was equally impressed by Painterly Photography by Linda McAdams (www.lindamcadams.com), who has a unique technique of hand-altering Polaroids and transferring them to canvas for an Impressionistic effect. The colorful scenes by City Man were reminiscent of my beloved New Orleans, and the unique scenes and pet portraits by Mark Turner (www.markvturner.org) were captivating.

If you've never been to the St. Peter's Art Show, I encourage you to visit next year (July 5, 2014).  If you go, be sure you come hungry because the famous turkey salad croissant lunch prepared by the ladies of the church is also something to look forward to each year! 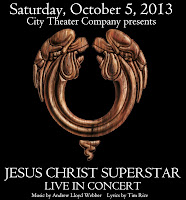 A Farewell to Danielle Rice — One of Delaware Arts' Best!

Blogger Note: We wish Dr. Rice the very best in her new endeavors. We are truly sad at her departure from our Delaware Arts circle, but we thank her for her unwavering commitment to invigorate, elevate and promote the Delaware Art Museum and the entire Delaware Arts scene. Thank you, Danielle!  We are so grateful and fortunate to have had you as one of our fearless and dedicated leaders.

The Board of Trustees of the Delaware Art Museum announces the departure of Executive Director Dr. Danielle Rice. Dr. Rice led the Museum for the past eight years. Her departure will be effective September 1, 2013. Mike Miller, the Museum's current Chief Financial Officer, will take the helm as acting Chief Executive Officer while the Board undertakes a national search for a successor to Dr. Rice.


Under her leadership, the Museum experienced a virtual rebirth. Shortly after her arrival, Dr. Rice successfully managed the opening of the newly renovated and expanded building, along with the related festivities in June 2005. She initiated a large number of community partnerships and re-established the Museum's image. She also led a strategic planning effort that resulted in a revised mission and tightly focused community-minded goals. In 2007 and 2008 she guided the Museum through the American Alliance of Museums' rigorous re-accreditation process.

During her tenure, the Museum hosted several successful major exhibitions and welcomed back the Bancroft Collection of Pre-Raphaelite Art from a world tour into newly designed galleries. In addition to enriching the Museum's collections through major acquisitions of art, including 50 works from the Vogel collection and numerous other gifts, Dr. Rice helped to initiate and launch several innovative uses of technology, including cell phone tours, dedicated websites for John Sloan and the Pre-Raphaelites, and the delightful interactive educational website Art of Storytelling. She led the Museum through its Centennial Celebration, including a wide array of partnerships throughout the state. She also initiated the Centennial Campaign for the Next Century Fund, which has raised over $6.5 million.

Gerret Copeland, Chairman of the Board of Trustees, noted on behalf of the Board, "Danielle has been a great asset to the Museum and to the community. She has made the Museum a place where everyone can feel welcome. We are deeply grateful for her leadership over the past eight years and we wish her all the best in her next adventure."

Beginning in September 2013, Dr. Rice will assume the position of Director of the Master of Science Program in Museum Leadership at Drexel University's Antoinette Westphal College of Media Arts & Design. This newly created Master of Science in Museum Leadership program is designed to prepare leaders who will enable museums to fulfill their missions of stewardship and education. The program combines cutting-edge theory, history and practice, and addresses the need for increased diversity in the museum workforce, management, collections, and programs. 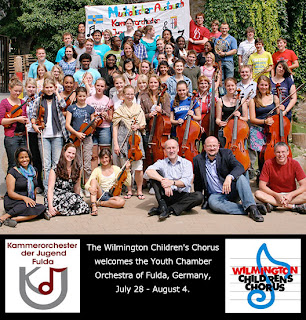 Excitement is building among the 160 youth from the Wilmington Children's Chorus (WCC) and Youth Chamber Orchestra of Fulda, Germany as they are in the midst of the week of a lifetime. A cultural exchange program and music festival that began Sunday, July 28, in Wilmington will culminate with a joint public concert on Saturday, August 3, at 7:30pm at St. Helena's Catholic Church, 602 Philadelphia Pike in Bellefonte.

The evening's performance will feature Schubert's Mass in G and other works for chorus, orchestra and soloists by Mendelssohn, Brahms and Bernstein. The concert is free and open to the public, although a free-will offering will be taken to help underwrite the costs of the concert. (A $10 minimum donation is suggested.)

Members of both ensembles have performed at public and private events during the cultural exchange week, including a July 29 Wilmington Blue Rocks game and a gala reception for community leaders at the Delaware Art Museum.  The week included daily rehearsal time for choristers and orchestra members, and so much more. The WCC promised its German counterparts a truly American cultural experience featuring a series of fun and educational activities, both in the City of Wilmington and the region.

To start, the orchestra and their chaperones enjoyed a pool party and barbecue with WCC at St. Anthony's in the Hills.  On July 29, WCC's German guests experienced minor league baseball with the Wilmington Blue Rocks and WCC's Young Men's Ensemble sang The National Anthem prior to the first pitch. Members of both groups entertained audiences at an invitation-only Welcome Reception at the Delaware Art Museum later that weekend.

The fun continued with WCC and orchestra members traveling to Cape Henlopen for an all-American beach day, complete with summer sun and an evening clambake as chaperones got a special tour of Delaware's own Dogfish Head Brewery in Milton. Delaware's German-American community welcomed the guests at the Delaware Saengerbund in Newark. The Birthplace of Liberty — Philadelphia — was a stop, with visits to The Constitution Center, Independence Hall, the Liberty Bell and lunch at Reading Terminal Market. Saturday, August 3, will be concert day, and the orchestra will depart on Sunday, August 4, after a morning brunch and musical showcase at Christina Cultural Arts Center.

WCC's Artistic Director Kimberly Doucette says the choristers — ranging in age from eight to 18, plus alumni singers from WCC — have set aside weekend and summer activities to practice and prepare for these events.  For many choristers, this is the first experience meeting and working with individuals from outside the United States; for others, this event marks an opportunity to reciprocate the hospitality they received from German orchestra members and host families during a 2011 summer tour, which included time in Wilmington's Sister Cities of Fulda, Germany and Nemours, France.

"The 2011 visit was life-changing for our choristers and their families," Doucette recalled. "They experienced the pride of representing the City of Wilmington as cultural ambassadors abroad. Our choristers became global citizens and formed lifelong friendships with both the musicians and their host families in Fulda. We cannot wait to welcome the orchestra and their chaperones to Wilmington."

"In hosting our German friends, we're building on the success of a wonderful cultural exchange born in 2011," Doucette concluded, "and we're showing children who might never travel overseas the immense value of not just sharing music, but sharing all Wilmington has to offer - here at home and abroad."

Both the WCC and The Fulda Youth Orchestra are widely recognized regionally for their commitment to artistic excellence and music education. In Delaware, the WCC enjoys a strong reputation for creating opportunity for local and regional youth. WCC has performed with the Delaware Symphony Orchestra, OperaDelaware, First State Ballet Theatre, the Philadelphia Arab Music Ensemble, and American composer Robert Powell.

The Festival was sponsored in part by Sister Cities International of Wilmington, Wawa, The Delaware Division of the Arts, the Christina Cultural Arts Center, the Kenny Family Foundation of ShopRite Supermarkets, and Papa's Pastry in Wilmington. St. Helena's Parish as well as First and Central Presbyterian Church and The Episcopal Church of Saints Andrew and Matthew have generously supported this project by providing rehearsal and performance space. The Delaware Saengerbund provided cultural and language support to the WCC as it prepared for the exchange.

The Wilmington Children's Chorus is a multicultural children's choir sponsored by the City of Wilmington, Dennis P. Williams, Mayor, as a project of Cityfest, Inc. Any qualified child can participate for free, regardless of financial or social background.