In his Playwright's Note, David Robson describes his short work as "absurd, profane, silly, bizarre, take-no-prisoners kind of stuff." Cruel, Calm & Neglected is all of those things, and, at its best, is pretty deep, too. Not that the silliest pieces aren't fun. "Mel and Mee" is a sort of twisted Mel Gibson fantasy featuring Melissa Dammeyer and Kate Brennan; in "Head First," Kevin Regan plays a toilet as Andrew Mitchell and Suzanne Jean Stein's Peter and Rachel do an odd (and sort of gross) dance of old and comfortable romance; and "You Rang," featuring Jess Eppler, Jim McCabe and Kevin Regan, is about a cell phone with a soul that once inhabited a training bra. Robson seems to go out of his way to be thought-provoking in "Ed Rex," a well-acted piece featuring Michael Gray as a sleazy (very sleazy) corporate CEO, but, though it has its moments, it ultimately feels a bit heavy-handed.

Where the absurd meets the profound best is in "The Speech," the opening piece. The play starts abruptly, while the house lights are still on and audience members are still chatting. Dylan Geringer is Dani, a young woman giving a speech to her community college class. She's frazzled, can't stay focused, and before you know it, she's happily telling the professor and the class her not-so-happy life story, parts of which are acted out with Todd Holtsberry as her mother and Greg O'Neil as her sort-of boyfriend. It's darkly funny as Dani tries to come to terms with her own potential, and more than a little bit moving. Geringer is perfect in the role.

Also strong is "Killing Neil LaBute," in which aspiring playwright James (George Tietze) writes a critical Amazon review of LaBute's new play, and finds himself in an online exchange with the famous (and, apparently, super-sensitive) stage and film writer, played by the hilarious Melissa Dammeyer in a curly wig. Did Robson himself have a little run-in with the real LaBute on Amazon? I don't know, but it's funny, whatever the inspiration.

Cruel, Calm & Neglected will be performed for one more weekend, March 2 and 3, at the Black Box at OperaDelaware in Wilmington. See city-theater.org for tickets.
Posted by Holly Quinn No comments:
Email ThisBlogThis!Share to TwitterShare to FacebookShare to Pinterest
Labels: City Theater Company

Pyxis Quartet at the Mainstay 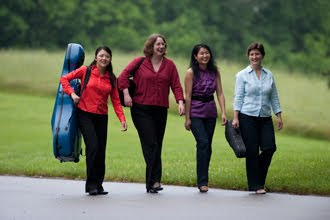 It is so hard to get tickets for the Pyxis piano quartet Kentmere Concerts at the Delaware Art Museum that I traveled to Rock Hall, Maryland to hear them play in the Hedgelawn Classical Music Series at the Mainstay.

The Mainstay, a restored 105-year-old grocery store, may not be the ideal venue for a classical chamber series acoustically, but the homey chairs and sofas, the amiable and knowledgeable concert hosts and the charming atmosphere made up for the informality of the setting, and the Mainstay organization has their own small, well-maintained Kawai grand.

The quartet’s program was both ambitious and eclectic. A little known set of four pieces which Richard Strauss wrote in his teens provided the quartet with an opportunity to create characterizations - from the cello/piano introduction of the Stȁndchen (serenade) to the Middle Eastern rhythms and bowings for the Arabian Dance.

The second piece, the quartet by Joaquin Turina, put the string players to the test. Meredith Amado played very high violin notes effortlessly, with beautiful intonation and control. Jie Jen’s cello had a wonderfully rounded vibrato in the very romantic solo parts. Ms. Jen can make her cello soar to the extremely high registers required in the Turina with great ease.

The Piano Quartet in B-flat Major, Opus 41 by Camille Saint-Saens was a showpiece for pianist Hiroko Yamazaki who glided through the complex fugue of the Andante maestoso ma con moto at a very high speed. Amy Leonard’s viola playing was a beautiful middle voice in the fugal writing for strings and piano. The weaving in and out of voices by each musician provided a beautiful tapestry of sound.

If you can get tickets for the Kentmere Series Concert at the Delaware Art Museum on Friday , February 17, this program is well worth hearing. The Thursday, February 16 concert has been sold out for weeks.

As much as I know Bootless Artworks would prefer to have their own permanent theater (and who can blame them?) there’s something exciting about going to a different location for every Bootless play. It’s like an adventure, especially when the theater is an empty storefront in the Shipyard Shops, as it was for last year’s The Pillowman, and as it is for the current show, Dead Man’s Cell Phone.

The makeshift (and I mean that in the best sense of the word) theater has a low stage and about 45 seats on risers, ensuring that there isn’t a bad seat in the house. On Saturday night, the place was packed -- I think they even added a few extra seats. Bootless has been offering online deals for this show, and it seems it’s paying off. After Dead Man’s Cell Phone, I would bet that many of the new patrons will be back.

Directed by Rosanne DellAversano, who also designed the sets and costumes, Dead Man’s Cell Phone tells the story of a woman named Jean (Lindsey Burkland), who finds herself caught up in a whole new life when she starts answering the cell phone of a dead man in a cafe. The dead man, Gordon (Randall McCann), had a mysterious life filled with colorful characters, including his somewhat neurotic firecracker of a mom, played by Ruth K. Brown; his basket case wife, played by Jennifer Huth; his mistress, played by Lauren Ojeda; and his lonesome brother, played by Bob DeMarco. Jean, as the last person to see Gordon alive, delivers them messages of his final thoughts and words -- despite the fact that she never actually spoke to him.


There’s more to Sarah Ruhl’s darkly comic story, as it takes a surreal turn and we learn more about Gordon than the idealized image Jean has built up. At its core, Cell Phone is about yearning to make real connections in an electronic world. It’s funny, well-acted, and fresh -- a bargain at any price.

You can still catch Dead Man’s Cell Phone this weekend through February 4 (the Sunday show has been cancelled). See bootless.org for more information.
Posted by Holly Quinn No comments:
Email ThisBlogThis!Share to TwitterShare to FacebookShare to Pinterest
Labels: Bootless Artworks

Don’t let the WDL’s Parade pass by without seeing it!

The Wilmington Drama League’s latest production, Parade, doesn’t have the story you would expect from a musical with such a joyous name. The musical written by Alfred Uhry and Jason Robert Brown is based on a true crime story that occurred in 1913 in Georgia. The musical explores the sensationalized murder case of a popular thirteen-year-old girl, Mary Phagan on the day of the annual Confederate Memorial Day parade. The young girl’s boss, Leo Frank, a Jewish factory manager from New York, is falsely convicted for the killing by the corrupt local prosecutor, Hugh Dorsey. Frank’s wife, Lucille, will stop at nothing to prove that her devoted and hard-working husband is innocent, even if it requires the assistance of Georgia’s governor.
The amazingly talented Brendan Sheehan, who in my opinion is one of the best local performers in Delaware, gives an incredible performance as Leo. He finds the heart of this character and takes the audience on a journey into one man’s revelations. Sheehan is joined by a stellar cast, including Rebecca Gallatin as Lucille and Jeffrey Santoro as Hugh. Both performers rise to the challenge of this compelling production and also give outstanding performances. Patrick Sutton as Britt Craig, a journalist covering the case, gives a rousing performance in one of the production’s big dance numbers, “Big News!”
Chris Turner’s direction and interpretation of the tragic musical is superb. The multimedia production includes pictures from the time period projected on a screen at the back of the stage. This added element engages the audience gives an actual glimpse of the early 1900s lifestyle.
Parade runs until February 11, 2012. For information and tickets, visit www.wilmingtondramaleague.org.
Posted by Charles "Ebbie" Alfree III No comments:
Email ThisBlogThis!Share to TwitterShare to FacebookShare to Pinterest
Newer Posts Older Posts Home
Subscribe to: Posts (Atom)