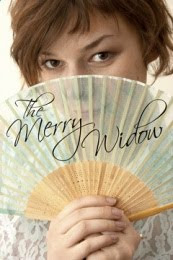 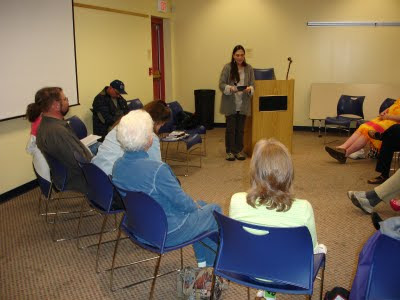 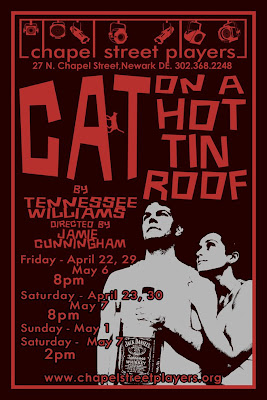 Oh No They Didn't! The Full Monty at NCT

The minute the lights go down for the New Candlelight Theater's production of The Full Monty, you're transported from the big barn in Ardentown to a nightckub in Buffalo -- and it's Ladies' Night. Rarely does the line between watching a play and actually experiencing what's happening in the play disappear so quickly and completely.

Most of The Full Monty, directed by NCT's Producing Artistic Director, Chris Alberts, doesn't take place on the nightclub stage, but those scenes are no less engaging. Based on the popular 1997 British film of the same name, the musical follows a group of out-of-work steel workers desperate to make ends meet, who turn to stripping -- one night only -- in the hopes of making $50,000. The stakes are high: Jerry (Paul Goodman) is behind in child support payments, and could lose joint custody of his son (Timmy Bradford); Dave (David T. Snyder) feels so inadequate that his marriage to Georgie (Erienne Poole) is crumbling; Harold (Patrick O'Hara) has been pretending go to work as a foreman every day for months while his wife (Erica Scanlon Harr) enjoys a carefree middle class lifestyle; and Malcolm (Peter Briccotto) had given up on life altogether. They join together and recruit Ethan (Chris Brown) and Horse (Andre Dion Wills), who each add certain physical attributes, as well as some great chemistry, to the act, which comes to be called "Hot Metal."

Despite some dark themes, The Full Monty is a full-on comedy. And very good comedy, at that. Composer/Lyricist David Yazbeck doesn't hold back. Sometimes it's racy  (it's a show about male stripping, after all), and sometimes it's dark, as with the number "Big Ass Rock," where Jerry and Dave assure the suicidal Malcolm that they're true friends who would kill him in any number of ways if he asked -- a service that was no longer needed once Malcolm realized he had true friends. There is sweet romance; I won't give all of the romance away for those who haven't seen the movie, but it's all done exceptionally well. The show has its share of poignant moments between laughs.

The cast fit their roles to a T, without exception. Scene stealers included Erica Scanlon Harr (is there ever a show she doesn't steal?) with "You Gotta Love That Man," Andre Dion Wills with "Big Black Man," Peter Briccotto in "Big Ass Rock," and Susan Dewey as Hot Metal's practice pianist and showbiz vet, Jeanette.

Ultimately, we are returned to the nightclub, and Hot Metal's big night. It's a wild show you won't soon forget.

The Full Monty runs through May 22, with special Ladies' Discount Nights on April 15 and 29. This is an adult show -- no one under 17 is permitted. For tickets, click here.
Posted by Holly Quinn No comments:
Email ThisBlogThis!Share to TwitterShare to FacebookShare to Pinterest
Labels: New Candlelight Theatre 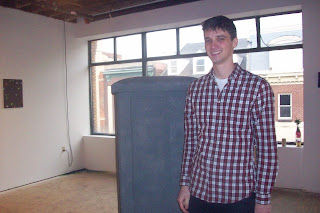 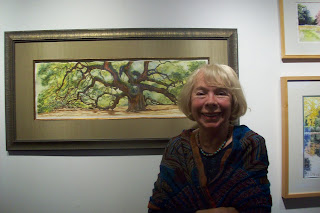 This month, The Delaware Center for Horticulture features Taken by Trees, an exhibit of watercolors by Barbara Seymour. Stunningly vivid, the works range from portraits of trees in her neighborhood to the elegant Swarthmore College (Seymour’s alma mater) campus. She creates surprisingly bold colors, depth and textures with watercolors and ink. A centerpiece of the exhibit, Angel Oak (pictured) embraces its audience with its majestic poetry. Seymour’s love of nature sings out from the paintings. See http://web.me.com/seymourart/Site/Welcome.html

At DCAD the Annual Continuing Education exhibit is in full swing. Both students and teachers are showcased. Donna Cusano, Beginning Pastels instructor, shows three lovely works. My favorite is Humbled Means, a bird’s eye view of houses nestled in the countryside. Cusano almost makes brush strokes with the pastels, evoking hypnotic landscapes. Also notable are the photographs of Nick Pulos, a student from the Macro Photography class. His close-up shot of his son’s eyelashes is dramatic and riveting. See http://www.donnacusano.com and http://nickpulosphotography.com

At the New Wilmington Art Association I had the pleasure of talking to Dan Haddigan. His untitled work is a structure designed to resemble concrete and emit smoke. He explained he is fascinated with futility: the concrete is supposed to be impenetrable, yet the smoke manages to waft through. Underneath, he has installed a smoke machine. Haddigan’s piece is interesting and well-executed. Like my other favorite artists participating in the Wilmington Art Loop, he invites his viewers to wonder and perhaps ponder, too. See http://www.danhaddigan.com/

Posted by Jessica Graae 2 comments:
Email ThisBlogThis!Share to TwitterShare to FacebookShare to Pinterest

On Saturday, April 2, at 7:30, David Schelat and his Mastersingers present Johannes Brahms’ Ein Deutsches Requiem, in a program which includes other German anthems by Eighteenth and Nineteenth century composers for a lush, romantic evening.
The first part of the concert has some short a capella pieces which show off the great control and uniform harmony David Schelat has achieved with his 34-member chorale.
The Frohlocket, ihr Volker auf Erden by Felix Mendelssohn has such a perfect compositional structure that the voices resound and return in the marvelous stone environment of the First and Central Presbyterian Church sanctuary. The Mastersingers’ spirited rendition makes this piece exciting and moving.
The lyrics of Talismane, Opus 141, Number 4 – a poem by Johann Wolfgang von Goethe are inescapably gripping. “The East is God’s, the West is God’s. Northern and southern lands rest in the peace of his hands.” The chorus sings these words with such conviction that it grabs the listener by the ears. 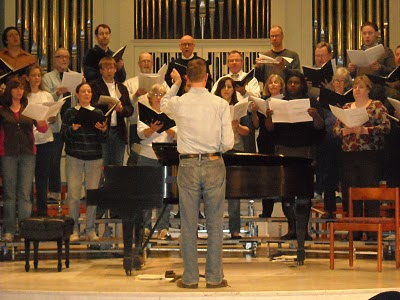 The pièce de résistance is the wonderful requiem, accompanied on the piano by Lotus Cheng and Hiroko Yamazaki in the four-hand arrangement by Brahms. Both the small chorus and the pianists have no trouble creating a build-up of glorious sound that fills the sanctuary. Soloists Eileen Clark, soprano and Edward Albert, baritone have wonderfully strong voices that ring out above the chorus with ease.
If you have never heard the Brahms Requiem, this intimate space and small ensemble provides great opportunity to feel as if you are right in the middle of the music.
See www.fandc.org.
Posted by Margaret Darby No comments:
Email ThisBlogThis!Share to TwitterShare to FacebookShare to Pinterest
Labels: David Schelat, First and Central Presbyterian Church, Mastersingers of Wilmington
Newer Posts Older Posts Home
Subscribe to: Posts (Atom)