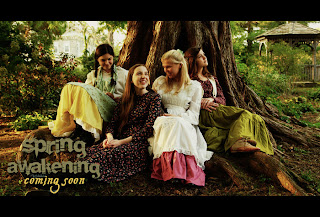 A group of Delawareans – including Christopher Bruce of Bruce Productions – is hard at work bringing their adaptation of the groundbreaking play Spring Awakening to the silver screen, and they want YOUR HELP to get the project over the finish line!

"Spring Awakening: The Movie is a true collaboration," says Bruce, who producing the film. "It embodies the spirit of Independent Film and features many local actors, crew and locations in the tri-state area." The movie is a  non-musical version based on Director Kurt Leitner's English translation of Frank Wedekind's original German play. "As the first feature-film version, our production follows closely the themes of the original, revolutionary author," says Leitner.  "[the story is]...filled with teen angst, rebellious actions and sexual questioning and follows what young teens experience when coming of age. Across the globe, this cautionary tale continues to inspire rebels and surge debate." And they're thrilled to produce it here in the Brandywine Valley.

The producers have launched a Kickstarter campaign to help raise the final funding they need.  For those unfamiliar, Kickstarter is a type of "crowdfunding"—a social network designed to help accomplish creative projects. A group or individual creates a project and asks supporters to help meet their predetermined funding goal, with special incentives/"backer rewards" for varying levels of support.  (Note: Kickstarter does not charge for your pledge until the fundraising campaign ends and ONLY if the requestor reaches the set goal.)

If you want to learn more about the film or the funding process, email Christopher Bruce directly.

Click here to see a video promotion of the film!
Posted by Michelle Kramer-Fitzgerald
Email ThisBlogThis!Share to TwitterShare to FacebookShare to Pinterest