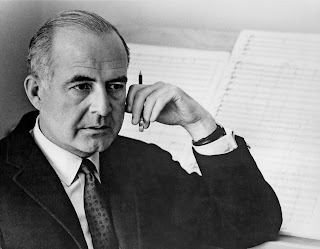 Composer Samuel Barber's hometown of West Chester, Pa., intends to present a concert of his music every month through 2010. His 100th birthday is in March.

Programs will be held at Chester County Historical Society, West Chester University and the First Presbyterian Church of West Chester.

The schedule from January to May is already available at http://www.chestercohistorical.org/.

Barber left lots to choose from -- particularly art songs and chamber music, as well as orchestral work and several operas. His famous Adagio for Strings is, as his biographer Barbara Heyman put it, the tip of the iceberg.

The Barber family home is on Church Street, though Sam spent his adult life in New York and Europe. He was the son of a local doctor, and was the second student to enroll in the Curtis Institute of Music. His baritone voice was good enough that he studied singing as well, which accounts for his prolific vocal literature.

His maternal aunt, Louise Homer, was an acclaimed operatic contralto and sang Barber's songs in recitals while he was still a teenager. He also played the organ at First Presbyterian.
Posted by Rita Truschel
Email ThisBlogThis!Share to TwitterShare to FacebookShare to Pinterest