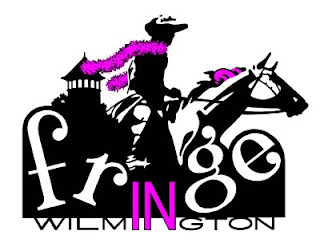 The crowd already gathered in Theatre N was hip, happy and sporty – is this Philadelphia? Tina Betz and Rich Neumann, coordinators of Wilmington’s First Fringe Festival, were witty, arty, and articulate as they hosted the awards ceremony and screening of the top ten Fringe Fest films on Sunday, October 4. The winners were:

The Dead Art, a film with mimes Scott Michaels, Nate Davis and Brahmin Jackson, veered to the bizarre when a mime murders passers by and finally hangs himself.

Ric Edevane’s film, The Rockford Case, was a take-off on Mission Impossible. His use of a heartless command control operative gave a great comic touch.

Devoted by Sharon Baker portrayed a lonely woman toasting in birthdays and other holidays at a table set for two to an excellent violin score.

My personal favorite was Playing Games, a film made by the family of photographer Amy Theorin. Two boys roughhouse in the Wilmington and Brandywine Cemetery until one disappears. The remaining brother must challenge a devilish sprite to a chess game to get his brother back. Kudos to Theorin’s fifteen-year-old neighbor who improvised the score on piano.

The filmmakers and the organizers and volunteers of the Fringe Festival should be proud of the great work they inspired with the contest – all ten of the top films are still in my head.