Now in its 6th year, Delaware All-State Theatre (DAST) brings together the “best of the best” student performers from Delaware elementary, middle and high schools to put on a professional level production. From stellar casts to exceptional sets and costumes, DAST’s shows are of the highest caliber. After the group’s 2012 production of the boisterous musical comedy Hairspray, this summer DAST has taken a darker turn with its production of Frank Wildhorn and Leslie Bricusse’s musical thriller Jekyll & Hyde based on Robert Louis Stevenson’s novel The Strange Case of Dr. Jekyll and Mr. Hyde. 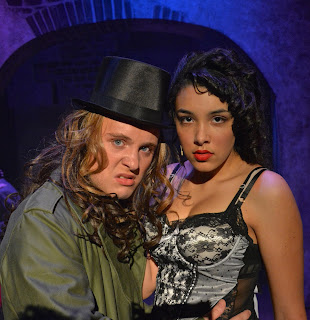 Every year I attend the DAST show, and every year I am amazed by the talents of the young adults. At times I forget I’m watching youth and teenagers, not professional performers. This year’s exceptional cast transports the audience to Victorian England where the newly engaged Dr. Henry Jekyll (Chad Michael Jervis) wants to create a remedy to remove the evil that he believes inhabits his catatonic father. After presenting his idea to the Board of Governors of St. Jude’s Hospital and requesting a human subject for testing, the Board quickly dismisses what they consider is a blasphemous proposal. Not having the backing of the Hospital, Dr. Jekyll decides to continue with his project and using himself as his subject.

Dr. Jekyll becomes obsessed with his work, which takes precedence over spending time with his fiancée Emma (Kristina Biddle) and his best friend/lawyer Gabriel John Utterson (Ben Walker). He becomes addicted to his elixir and the evil it brings out of him (Mr. Hyde). His addiction takes over causing him to shun Emma and Gabriel and cause terror and mayhem in the city. Mr. Hyde also begins a lurid affair with a prostitute Lucy Harris (Kayla Saunders), whom Dr. Jekyll befriended at a slum bar (The Red Rat) that he and Gabriel visited for Dr. Jekyll’s bachelor party.

The stunning production directed by Jeffrey Santoro is dark and harsh, yet lively and engaging. The exceptional sets by DAST’s Technical director, Ryan Stofa and costumes by Lorraine Anderson create the spirit of the 1800s. From the streets of England to Dr. Jekyll’s laboratory to a sordid bar, the sets evoke a time passed by, while the costumes exemplify the divide between sophisticated members of society to prostitutes and peasants.

However, it’s the cast that drives this musical, led by the captivating Mr. Jervis as both Dr. Jekyll and Mr. Hyde. Mr. Jervis magnificently captures both sides of his character, finding and peeling away the layers of the enigmatic Dr. Jekyll and his alter ego, Mr. Hyde. He easily transforms from a loving and compassionate doctor to a vengeful and sadistic man. He best exemplified his capabilities during the Confrontation number when Mr. Hyde finally confronts Dr. Jekyll before taking over.

Mr. Jervis shares the stage with equally talented leading ladies. Ms. Biddle as Dr. Jekyll’s high society fiancée, Emma, and Ms. Saunders as Mr. Hyde’s street tough mistress, Lucy, are brilliant! Both ladies have stunning voices that make it very hard to believe they are high school students. Their vulnerability that comes through their sumptuous duet In His Eyes is more than what is expected from high school students. Don’t worry, not every song is dark or sad, Ms. Saunders’s exuberant number Bring on the Men adds some light-hearted FUN to the production.

The three leads are supported by a strong cast of students who electrify with their acting, singing and dancing talents. With precise musical direction by David Snyder and choreography by Tamara Paulino, this production is a sure fire hit!