Going Into the Woods at the Wilmington Drama League

The Wilmington Drama League closes its 79th season with the charming musical Into the Woods by Stephen Sondheim and James Lapine. The show’s plot about a baker and his wife who want to have a child, but first have to break a spell placed on them by their neighbor witch, is combined with multiple beloved Brothers Grimm fairy tales, including “Cinderella”, “Jack and the Beanstalk”, “Little Red Riding Hood”, and “Rapunzel”.

Act one of the three hour production provides the basis of the original tales along with the new story, but act two reveals the reality of the ever afters – and for some of our favorite childhood characters, they’re not very happy! However, like many of the original fairy tales, Into the Woods provides a lesson to be learned. Throughout the show each character begins to realize that his/her actions lead to consequences that aren’t always what he/she actually wanted, expected, or intended. The characters learn that not only do they have to live with the consequences, but future generations will also have to contend with the outcomes. 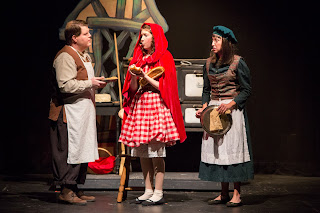 Director Chris Turner’s delightful production boasts wonderful performances by the ensemble cast. Ed Emmi gives a charismatic performance as the Narrator of the show. Patrick Ruegsegger and Victoria Healy enthrall as the desperate baker and his wife. They’re great timing and superb voices are perfect for the roles. Zack Langrehr and Rebecca Gallatin are splendid as Jack and his mother. Both actors exquisitely bring the mother/son relationship to life and delicately handle the woes their characters’ must face. Christy Watt as the sassy Little Red Riding Hood and Shelli Haynes Ezold as the evil Witch give devilishly FUN performances. Both women bring out their inner-divas and command attention. Ms. Haynes Ezold rendition of “Children Will Listen” in the finale is absolutely gorgeous.

Set designer Tom Haughey has built an enchanting forest with whimsical homes where the characters dwell. His set, complemented by Jenna Ford’s colorful costume designs and the outstanding performances transports the audience from the real world to a beautiful fairy tale land that’s difficult to leave!

Into the Woods at the Wilmington Drama League closes June 16. Visit www.wilmingtondramaleauge.org  or call 302.764.1172 for additional information and/or to purchase tickets. Below picture by Jonathan Ripsom.