A Skirmish of Wits Prevails in Arden 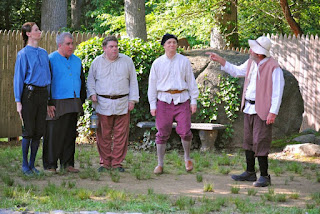 The last time I saw Much Ado About Nothing was in sixth grade — put on by Wilmington Montessori and led by the passionate Helen Gadsby, a devout Shakespeare fan. Helen had passed along her love of The Bard to years of Montessori children, and I certainly did not escape this delightful gift. Having not seen the piece since my humble beginnings, I did some light reading to brush up on the lines and plot.  Not that you need to; the Arden Shakespeare Gild did a magnificent job bringing this classic to life on the quaint outdoor Field Theatre on the Arden Green.  If you're not familiar with the plot, it's easy to follow the journey of the two central couples, both inflicted with love — one from cupid's arrow, the other from a trap.

I truly believe Shakespeare is meant to be enjoyed outdoors. It provides an ambience that harkens back to the Globe Theatre in London.  I would suggest — although the wooden benches do have backs — you bring a seat cushion with you (Note: bug spray might also be a wise idea, too).
The Gild presented a delightful rendition with minimal props, backdrops and overly-complex period dress, allowing the work instead to stand firmly in its wit and clever writing, adorned by the passionate acting of some well-rounded talent.

The opening scene sets the tone of the performance, and the sharp tongue between Benedick (played by Adam Wahlberg) and Beatrice (Kerry Kristine McElrone), two of the shows star-crossed lovers. The chemistry between Wahlberg and McElrone (at right) is evident throughout. They play off each other with ease and exchange barbs with precision providing punch to the mirth and matter contrived by the Bard, all the while conjuring laughs from the audience. This is especially evident in a scene as their characters stalk their conspiring cohorts to carefully listen in, each buying into the myths created for their ears.  Wahlberg delights the crowd as he rolls on the ground (directly into the audience) or dons a straw hat in disguise. Accompanying their strong performances, a doe-eyed Claudio (Colin Antes) brings grace, wit and valor to the young lord of Florence. His lover, Hero (Emma Orr), brings a bubbly, soft and soothing presence to the stage, heightening the innocence of her character to be betrayed by the self-proclaimed villain, Don John (Dan Tucker).


Additional strong performances from Zachary Theis (Borachio), Lucy Smith (Margaret), James Kassees (Leonato), Robert Tietze (Don Pedro), and Dan Tucker seal the cast. Theis and Allan Kleban (Conrad) provide intrigue and tragedy in their scenes.
As Act I draws to a close, Balthasar (Rebecca Fisher) instructs the audience in the interlude. TIP: Bring a few dollars with you for the Gingerbread Bard–shaped cookie and glass of lemonade (each $1.50). All of the pretense and plotting of Act I comes to a head in Act II as the characters mingle and set the stage for acts of love or treachery.
Will the tragic plot undo the unrequited love between star-crossed Hero and Claudio? Will the Herculean Cupid's Trap plotted by Don Pedro, Leonato, Hero, Claudio, Margaret and Ursula unite Benedick and Beatrice? The answers to these questions await you, along with many laughs and true delight in one of Shakespeare's classic comedies.


Much Ado About Nothing makes for a perfect night under the stars for a family outing or date night. The show is approachable, easily understood and translated beautifully to the outdoor stage by director Mary Catherine Kelley and her dedicated team. Although subtle, the work of Linda Kimmelman (Assistant Director), John King (Music Director/Composer), Valerie Hutchinson and Laure Wallace (Production Managers), Judith Calhoun (Costumes) and Dawn Morningstar (Choreography) do not go unnoticed. The musical accompaniment provided by Emily Loney, Rachel Loney, Melanie Riblett and Sam Arthur round out the performance with soft musical notes between scene changes and slight taunts to mock the actors in their monologues.

If you're looking for a fun show with an entertaining cast in a unique outdoor setting, don't miss Much Ado About Nothing. The show continues June 13-15, 21 & 22 at 7:30p.m. at the Field Theatre on the Arden Green (Rain location: Gild Hall). Tickets are $10, General Admission, $8 Arden Club Members, $5 children 12 & under. To reserve your ticket call 302.475.3126, email: reservations@ardenshakespearegild.org or visit www.ardenclub.org.
Posted by Arts in Media
Email ThisBlogThis!Share to TwitterShare to FacebookShare to Pinterest