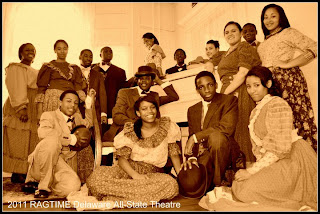 By Mara Goodman, PR Intern, Arts in Media
If you haven’t seen the Delaware All-State Theatre’s (DAST’s) production of Ragtime, you are missing a truly impressive performance happening right here in downtown Wilmington. It is the same company that produced such wonderful shows as Urinetown and West Side Story, although this time we’re not sent to a strange town where no one can pee or travel to 1950s-era Puerto Rican New York City. Ragtime instead features the story of three groups in America at the turn of the 19th Century: the WASP-y family in New Rochelle, the Jewish immigrant with hopes of “dolls, dresses and apple pie” for his daughter, and the Harlem musician’s struggle for racial equality in the face in injustice.
Covering three very different ethnic groups, the cast of Ragtime was huge. With all these students on stage, it was difficult for full-cast numbers to avoid sloppiness, but it was instead the individual numbers that let the audience quickly forget the youth of the actors. Colleen Scott’s beautiful performance of Your Daddy’s Son surely sent chills throughout the entire audience as she sat and whimpered, cast in a dark shadow. Her voice was stunning, and her acting evoked the most sincere emotion.
Culturally, this show will find most people looking back to their roots. As a Jew in the audience, I personally loved Ben Walker’s impressive performance of Tateh—with his bushy beard and Yiddish slang—and was entertained by his use of the classic Fiddler On the Roof arm swing. The Harlem Chorus’s Ragtime beats stole the show—looking wonderful in their first number wearing orange and pink dresses—I longed to hop on stage and dance with them. And Tatiana Lofton’s rousing performance at the funeral scene was spectacular; she had a phenomenal voice not to be missed.
And while this show was centered on the talent of these students, the costumes were spot-on for every character and the pit orchestra excellent. The set was solid at times—I was particularly fond of the train station set—though I wasn’t a fan of all the background images and would have rather have used my own imagination to envision the characters in settings.
If you’re looking for something to do this weekend, definitely check out Ragtime. This musical captures a realistic range of human experiences, quickly moving from funny, sexy scenes to heartbreaking solos and back again. And while the first act may seem to last forever, the second act comes back with a bang (literally—a gunshot) so don’t give in to sleep too fast.
See www.dastonline.com.
Posted by Michelle Kramer-Fitzgerald
Email ThisBlogThis!Share to TwitterShare to FacebookShare to Pinterest