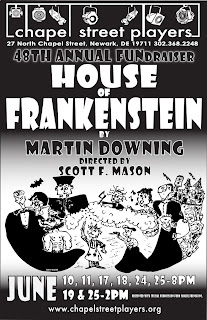 Feeling silly?  In the mood to shed a layer of skin and let out your inner monster?  Then Chapel Street Players' production of House of Frankenstein by Martin Downing (directed by Scott F. Mason) would be your best bet for entertainment this weekend! Vampires, werewolves, and other freaks roam the stage of this whimsical play, as each one visits Dr. Frankenstein’s castle in an effort to "normalize" themselves.  But how does one stop sucking blood and turning into a furry, raging canine when the clock strikes midnight?  While it seems that our friendly, monster-making scientist from Mary Shelley’s dark piece could have the answer, he may have lost his flair since his last experiment.
And don’t let the title scare you—this show is humorous. Watching a group of monsters that wish to escape their freakiness and come to the freakiest place is an automatic, ironic, recipe for disaster. Catastrophe is inevitable and quite comical as Frau Lurker warns everyone who dares that “those who enter Castle Frankenstein never leave.” And the notion of danger is challenged by humor as the character deemed Phantom of the Opera—or POO—warns of his powers, yet demonstrates cliché magic tricks, pulling a never-ending bandana, a rabbit, and flowers out of his shirt sleeve.
This show does have its charm. It's the little surprises that made it lovable: the kooky music of Bewitched, Monster Mash, and The Aadams Family that rang in the background and the pop-culture references to Facebook, Brad Pitt, and Justin Bieber reminded us that even vampires love their access to the Internet.  My favorites were the vampires, who take turns flipping each other off halfway through the second act, and whose French accents make them “wampires” instead of “vampires.”
And, did I mention that the show was done completely in black and white? Perhaps the most impressive parts of this production were the set and costumes, all doused in cobwebs and candles, leaving traces of scientific failure all around the room. There wasn't one part of this performance that wasn’t done up completely.  Harry Talbots, the werewolf, was covered in leather head to toes, and Igor, a resident of Frankenstein’s castle, stood hunchback the full two hours…if that’s not commitment to a role, then what is?
So, if you’re trying to figure out what to do on Friday the 17th, or Saturday the 18th, this would definitely be a fun show to check out. Don’t expect anything sober or serious, just lighthearted fun and freakiness!
See www.chapelstreetplayers.org.
Posted by Michelle Kramer-Fitzgerald
Email ThisBlogThis!Share to TwitterShare to FacebookShare to Pinterest
Labels: Chapel Street Players