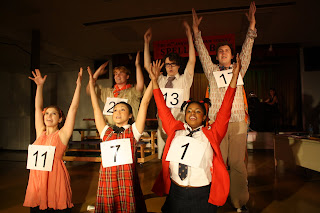 Bootless Artworks’ season opened with the spirited 25th Annual Putnam County Spelling Bee. This farcical show, with music and lyrics by William Finn and Book by Rachel Sheinkin, worked well on the cafetorium floor of the Reach Academy for Girls in Claymont, Delaware. The four-piece orchestra, conducted from the keyboard by Musical Director Brittany Fisher, played behind the actors. Directed by Kimberly Pryor, choreographed by Alyssa Novello, and produced by James Fuerst, the show included guest “spellers” from the non-profit and arts community. The night I attended, playwright Matt Casarino, AIDS Delaware’s executive director, John Klein and the Draggillious girls lent their orthographic talents.

This sweet little musical has it all: drama, intrigue, improvisation, unrequited love and dysfunctional families. Leaf Coneybear, played endearingly by Justin Walsh, wears capes and flared pants he designs himself. Each turn at the podium, the poor guy (self-described as “not that smart”) must spell rodent words like “Capybara” and “Acouchi”. After he stumbles on “Chinchilla”, he sings a goofy, impassioned goodbye song with the help of his bass-voiced rodent at the microphone.

Logainne SchwartzandGrubeniniere, whose long last name is the result of having two dads, is a kind-hearted competitor who traces words on her arm. Ashli Rice is adorable in the role, lending a perky, innocent touch. She tries hard to please her two self-involved dads (Wade Brodsky and Justin Walsh) but finally asks them, “What about me?”

The first to lose the bee is Chip Tolentino, played convincingly by P.J. Schweizer. His crush on Coneybear’s sister inspires an “erection destroying perfection,” distracting him from his spelling. An all-American boy scout, he returns to haunt the other contestants well after he is eliminated. His ultimate demise is his job hawking candy and potato chips to the audience.

The nimble Jeremy Gable is a neurotic and peanut-allergic William Barfee (that’s “BarfAY!” The accent ague is there for a reason!), who sweeps the shape of every letter with his agile foot. Even while dodging water on the floor, he manages to collect the trophy.

Rosanne DellAversano, the company’s artistic director, is excellent as Rona Lisa Peretti, the bossy head of the bee. A bumbling Vice Principal Panch (William Swezey) is consumed by a hilarious burst of violent rage as he bemoans his “assistant” principal title. As the lovable thug on parole, Mitch Mahoney (Wade Brodsky) gives out juice boxes to the losers of the bee. The versatile actor also appears as several dads in the production.

“The I Love You Song” is one of the most moving numbers in the show. Here, Olive Ostrofsky (Caroline Rhodes) sings sweetly about things “chimerical”- her spelling word – as she grapples with feelings of abandonment. Another character to find herself during the show is Marcy Park (Ahn Truong), a girl expected to do everything perfectly. Her quirky song “I Speak Five Languages” takes us on a whirlwind tour of talents in sports, languages and academics. When she flubs a simple word on purpose, she suddenly feels free.

The show’s theme of self-discovery peeks subtly through its sub-plots. Different every night because of the guest spellers and the improvisation, the show is truly entertaining!