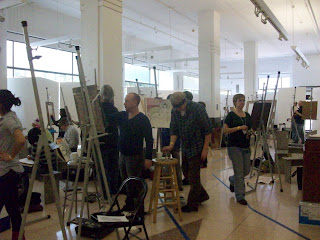 DCAD held its sixth Drawing Marathon on October 16. Over 70 artists participated in this day of figure drawing. The event, which was open to the public, began at 9 am and ended at 9 pm. Faculty, students, alumna and both the amateur and professional were all in attendance.

Cloth backdrops-some colorful and one all white- were artfully arranged, with still-life objects placed around to create the illusion of spaces in a house. When I arrived, the poses were already well underway. Artists were painting, drawing-even sculpting! It was inspiring to see so many levels of ability, styles and mediums all in one place. There was a quiet hush over the room, as the artists enjoyed the day, sharpening their skills and working their visual “muscles”. The poses ranged from 20 minutes to six hours in length.

One artist was creating a fabulous bust from clay. Another used the “20 minute pose” to create a drawing of the same figure in various poses. I enjoyed seeing the variety of ways the artists could use a figure and still life in their pieces, and wished I hadn’t brought a note pad, but a sketchpad instead.