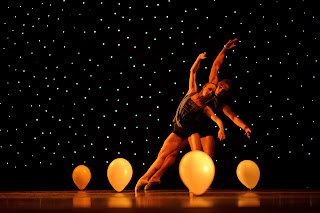 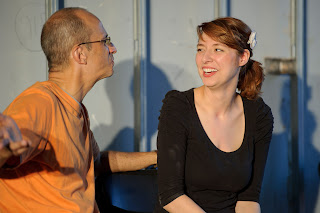 Fringe Wilmington 2010 went off with a bang at preview night. Performers gave the audience short snippets of their shows, and I was able to figure out quickly which were the shows not to miss.

Also opening that night was the Visual Fringe, in the Shipley Lofts. Much of this work begged for interaction, with “in-your-face” tactile qualities. Melinda Steffy’s wonderfully textured contributions added warmth and depth to the installation. Brookes Britcher is as fascinating as his work, “Life on Paper is a Series of Decisive Moments”. The artist, who began as a photographer, explained to me how this work had developed from a large framed family photograph he had found discarded on the street. Britcher feels photography, as an art from, is still stuck in its “representational” phase. This sculpture, created from an empty postcard display stand, luminescent tape, duct tape, confetti, colored silly-string, a light, extension cord, along with the framed photograph, is an exploration of the abstraction of photography. The faces in the photograph are shadowy, barely visible behind the tape, and the postcard stand is empty, serving as architecture and perhaps stability in Britcher’s whimsical, powerful piece.

Friday and Saturday, I squeezed in as many events as I could. I managed to catch the 48-hour film competition screenings, the 21st Century Ballet, improvs by Tongue and Groove, adult plays by Shel Silverstein, Mosaic’s Slave Narratives, the Sharp Dance Company’s exciting Addictive Fragility, and the hilarious film, 200 Characters or Less.

The First State Ballet Theatre was in top form with the luscious Nonsense in the Sense of Innocence choreographed and scored by Viktor Plotnikov. Music of Vivaldi, Beethoven and others was altered, and electronic blips, creating a foreboding theme, were wound into the familiar tunes. A long, flexible knit “dream” cap on the dancer’s head, connecting her to the ceiling, wound a beautiful, stretchy blue/green thread. The images created by this ever-changing line were endless and dramatic. The image of the cap constantly reminded us the dances embracing her and unfolding on stage before her were products of her dream life.

The Philadelphia based Improv troupe Tongue & Groove was wonderfully fast-paced and entertaining. They used material solicited from the audience: “What is something you wanted to tell someone, but never did? Write down an unusual email or text saved on your phone.” With our answers, the troupe created overlapping scenes and dialogue. I was thrilled when an actor created an entire rant out of my submission, “You need to whiten your teeth.” (Yes, I find myself zoning out, looking at people’s teeth sometimes. Sue me.) Skilled ensemble actors, they did not shy away from the serious or macabre.

Riveting was Mosaic’s Slave Narratives. Created by Ed Shockley, a Philadelphia writer/actor, the show consists of vignettes of narratives and letters-from Mordechai Vanunu, Galileo, the American slave trade-to the Montgomery Bus boycott. Though the work was a window into individuals and their experiences with slavery, there was a unifying theme-a message about slavery and how it traps and hurts not only those enslaved, but the entire community. lary moten was touching and funny in his various roles. moten brought the audience into the show, clapping and chanting, “I cannot be denied” in Shockley’s tribute to Mahatma Gandhi and Martin Luther King, Jr.

SCO Productions entertained us with some wildly funny short plays by Shel Silverstein. Ever the linguist, Silverstein develops scenes around rhymes and puns. Dana Michael is hilarious and bawdy in Buy One, Get One Free, a naughty tale in which everything must end in the sound “eeee”. In Smile Jim Burns, Kevin Regan and Gordon Holmes play a bunch of dumb hit-men, who terrorize Gibby (Matt Casarino) for his creation of a “have a nice day” and other insipid expressions. Silverstein is at his absurdist best in No Skronking: an unsuspecting diner (Jason Fawcett) prods his server Bertha (Kerry Kristine McElrone) to explain what “skronking” is, since it’s forbidden.