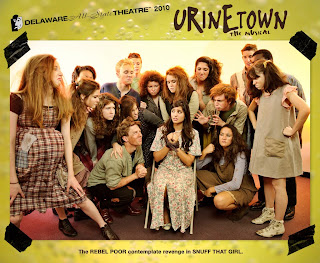 For the third year in a row, Delaware All-State Theatre is producing, in partnership with the DuPont Theatre, a full-scale musical theater show starring some of the area’s most talented and ambitions children. Urinetown, with a cast of 46, opens today, June 18, with performances Saturday and Sunday.

Talking with director/producer Jeffrey Santoro, I learned about the rigorous audition process for the young actors. Hundreds of kids showed up for the audition, with first round held behind closed doors, but the callbacks were held in the open theater. Santoro wanted to create an audition atmosphere similar to what is found in the professional theater: the actors could see their competition, and bring their auditions to the highest level possible. Some of the kids from past productions-Les Misérables and West Side Story- have gone on to professional theater. He estimated that eighty percent of the actors go on to participate in theater at the collegiate level.

The program is completely free, unlike some other children’s musical and theatrical programs in the area. The actors participate in workshops with well-known theatre professionals and have the unique experience of rehearsing and performing on stage with a professional orchestra at the state-of-the-art DuPont Theater.

Let’s support our young actors and future stars by checking out this great show!
For tickets, visit http://www.duponttheatre.com/ or call (302) 656-4401.