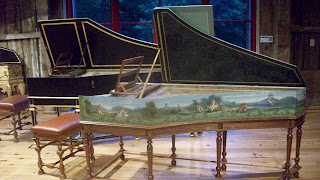 I have been lucky enough to attend a good portion of the Brandywine Baroque’s annual Dumont Concerts two years in a row. These concerts are a weekend-long celebration of harpsichord music, played by noted international performers. The unbelievable musicianship is almost a shock to experience in this beautifully refurbished barn, nestled in Delaware’s pristine countryside. Flintwoods is the only place in the world with two restored harpsichords by Dutch builder, Ioannes Ruckers. There are a total of eight harpsichords in the collection; however, the Dumont instrument, after which the series is named, was being repaired.

Davitt Moroney returned again this year to perform at the opening concert, and spoke about “mean tone” tuning during the lecture. “Mean tone” tuning is unlike the well-tempered tuning to which our modern ears are accustomed. Instead of using the harmonics of octaves and fifths, this system relies on the relationships of perfect thirds. My friend Barbara, a concert pianist, and I struggled to find a way to describe his perfect execution of Baroque timing: “It isn’t the rubato, it isn’t the Luftpause; somehow, each note is placed exactly where it should be.”

Moroney and Brandywine Baroque Founder Karen Flint sat down together at the 1635 Rucker harpsichord to play Nicholas Carleton’s Praeludium and a Verse. Only one part of the manuscript survived, so Moroney created his portion, slipping in some interesting educational tidbits for his audience. Though I missed the Saturday lectures, I learned something about the tuning, and why the thirds are tuned according to the key of the piece. It was fascinating to hear a passage sound wonderful on one instrument and almost dementedly sour on another for which it wasn’t intended.

Flint did a lovely job with the Pieces in D minor by Elizabeth Jacquet de La Guerre. An expert on de La Guerre, Flint treated us to an interesting biographical background on this exceptional composer.

Arthur Haas performed a varied program, beginning with a Prélude by Louis Couperin, the granddaddy of harpsichord composition and scholarship. A portion of his program--pieces by four Italian composers--was performed on the Italian harpsichord, built by Domenicus Pisauriensis. Partite sopra La Monica by Girolamo Frescobaldi simply sparkled on this very “earthy” sounding instrument, which had been tuned with these works in mind. Each note and phrase Haas played was thoughtfully executed, and performed in a joyful, physical way.

Also in attendance was John Phillips, a master harpsichord builder and technician, who tuned the instruments before the concerts and during the breaks. The audience enjoyed watching the speed and precision of his craft during pauses in the program.