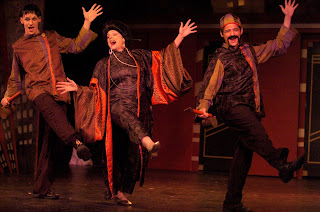 Starry-eyed aspiring actresses, an evil conniving villain, and an unlikely hero who saves the day: Thoroughly Modern Millie at the New Candlelight Theatre in Arden has it all. This rousing production, set during the 1920s, runs through October 10. The show is beautifully staged, choreographed and performed.

Millie Dillmount, sung beautifully by a sympathetic Erica Scanlon Harr, is a small town girl following her dreams to New York City. Her odyssey lands her in a fleabag motel, which is merely a front for a “white slavery” ring funneling unsuspecting young women to Hong Kong via a laundry hamper. Micki Sharpe, who also directs the show, plays the hysterical, conniving Mrs. Meers, slipping in and out of her fake pigeon English when necessary. Bun Foo and Ching Ho, unwilling cohorts in her slave trade, are played by Reza Mirsajadi and Brian Peeke respectively. They are side-splittingly funny as they sing their numbers in Mandarin, with the subtitle translations overhead.

As Millie’s dream of marrying her boss goes hopelessly wrong, she meets and falls in love with Jimmy Smith, played by the handsome and lithe Justin Damm. The wealthy Muzzy Van Hossmere is expertly sung by Jillian Pirtle. Megan Pisors’ portrayal of the slightly clueless Dorothy Brown is charming. As the big boss Mr. Graydon, actor Patrick O’Hara almost makes us want to like his bumbling, womanizing character.

Be sure to see this heart-warming show, filled with snappy dance numbers, whirling secretaries’ desks and flapper dresses.