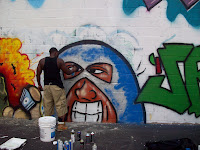 Jessica:
I began my Loop at the Delaware Art Museum. The overwhelming interest in the program “Illustrating Her World” produced two interest groups, and I happily joined the second for a “pre-tour” of the adjacent Copeland Sculpture Garden and the Labyrinth. There, volunteer Carol Maurer explained the genesis of these peaceful spots, built entirely by volunteers in a former reservoir for Bancroft Mills.

“Illustrating…” follows Ellen Pyle’s development from student to master illustrator. Lisa Smith, her great-granddaughter, gave an informative and heartwarming tour, beginning with a tour of Pyle’s paintings created while studying under Howard Pyle. One can see that Ellen Pyle’s style is reminiscent---if not almost identical---to that of her teacher. Smith described with passion how, after being widowed at age 42 with four children, this determined woman began to paint again and found a niche for herself as an illustrator for the Saturday Evening Post. Amazingly, for this exhibit, Smith was able to interview some of the actual models for Pyle’s illustrations, as well as obtain some original furniture featured in the paintings.
Next on my itinerary was “Un-capped”, a fresh new idea bringing graffiti art to the Loop. I traveled to a forlorn part of town, near the Fort Christina Park, not sure what to expect. Immediately I was greeted by a booming beat from a DJ table inside a fenced area where the artists were painting. Artists were all around: standing on forklifts spraying the hard-to-reach parts of the wall and kneeling to get the low corners. Serafino, one of the muralists, told me he chose to do a portrait of a soldier to honor those in Iraq. Though the mural was a spontaneous creation by many artists from the local hip-hip community, all came together as one unified piece. Freedom, a young woman I talked to, noted that some artists had previously been “in trouble” for creating their work. With “Un-capped”, they were happy to be part of a mainstream city-sponsored event---legal and much appreciated!
Margaret:
If you like blue, visit Graig Morris’ display upstairs at The Exchange on Market. Blue man in Key West shows a black man with graying hair on a bench in front of a hurricane fence on which the words ‘Restricted Area – Authorized Personnel Only’ are handwritten in red ink. The man is wearing a shirt of midnight blue; his face shows the weary wariness of being shut out of the mainstream. Venus is a small Florentine-style portrait of Venus rising from a Bahama-blue ocean. A new work portrays a young Michelangelo on scaffolding under the ceiling of the Sistine Chapel.
The real party was at Gallery 919. Beth Trepper’s set of three Pre-Raphaelite-style photographs taken in the gardens of Gibraltar captured the essence of works you will recognize from the Delaware Art Museum. She took antique wood frames and created matting with dried flowers in a William Morris wallpaper style.
Trepper has a knack for staging: her self-portrait dancing on the grounds of an Irish Castle makes you want to kick your shoes off and jump into the work to follow the dancer. The addition of a wig made her cousin look like a 1940s lost waif; her portrait of Edward and Patricia was so strikingly happy…I was delighted to meet Patricia herself and find that it was Trepper’s mother.
In Makin’ Bacon, a female pig perches pristinely at a French café table across from glamorous Debbie, dressed in black; the pieces gives off a hip New Yorker fashion issue feel.
Trepper’s friends and family catered, played music and sang a four-part a capella welcome.
While I can’t guarantee that Trepper and her relatives will be there every day, the photographs themselves are well worth a visit.
See http://www.bethtrepper.com/.
Posted by Arts in Media
Email ThisBlogThis!Share to TwitterShare to FacebookShare to Pinterest
Labels: Beth Trepper, Delaware Art Museum, Graig Morris, Un-Capped