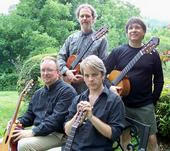 The guitars of BGQ plucked Dan Graper’s arrangement of a William Zinn string quartet version of Wolfgang Amadeus Mozart’s "Eine Kleine Nachtmusik” as one hundred people listened in the beautiful Pell Gardens along the C & D Canal in Chesapeake City.

The music and the idyllic setting seemed like something from another world – picnic blankets, happy faces, dogs and babies, and a very Spanish-sounding classical guitar quartet.

After two movements of Mozart, the quartet played Graper’s arrangement of a Georg Philipp Telemann string quartet, which showed their virtuosity – especially in a tricky fugal movement. They suddenly changed style in a Vivace they added to the Telemann.

After a dramatic Intermezzo from the opera “Goyescas” by Enrique Granados, a crack of thunder drowned the applause. The quartet continued with “Blue Tango” by Leroy Anderson, but those clouds burst and the crowd ran for cover.

The untimely ending left the crowd hungry for more, but no worries. Their appetite can be appeased on October 18 at Kennett Flash in Kennett Square, when BGQ will repeat the show and feature Mark Unruh in a ragtime/swing song that garnered him a bluegrass guitar prize.