Wilmington's Got the Blues 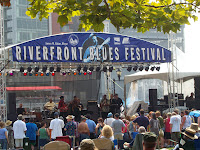 There has been an amazing line-up of outdoor entertainment and arts in the city this summer. The Riverfront Blues Festival, an annual three-day event, kicked off on August 7. Headliners Walter Trout and the Radicals, Charlie Musselwhite and Delbert McClinton were the main attractions.

Despite the heat and humidity, the Tubman-Garrett Riverfront Park was packed with humanity on Sunday: People sitting in chairs and blankets spread on the grass. Some die-hard fans crowded the stagefront, dancing and enjoying the music up close. A Tribute to Freddie King rocked the Main Stage with their rendition of “Sweet Home Chicago,” while the audience sang along. Their awesome sax and guitar riffs reminded us that the Blues is really the daddy of rock n’ roll.

On the Bandwagon Stage, 61 North gave us a Blues tour around the world, passing through England, Ireland, and the U.S. They played the classic American blues song, “When Things Go Wrong (It Hurts Me Too),” inviting guest musicians to play toward the end of their set.

Delbert McClinton delivered a program ranging from Country-Western to Chicago and New Orleans. His touching ballad “Sending Me Angels” was sweet and lyrical. From his upcoming album Acquired Taste, he sang a rollicking song, “People Just Love to Talk”. His earthy harmonica-playing gives his music the flavor of back porch blues. I watched as people carrying coolers and lawn chairs happily bounced their way out of the park on their way home to the beat of “Have a Little Faith in Me.”