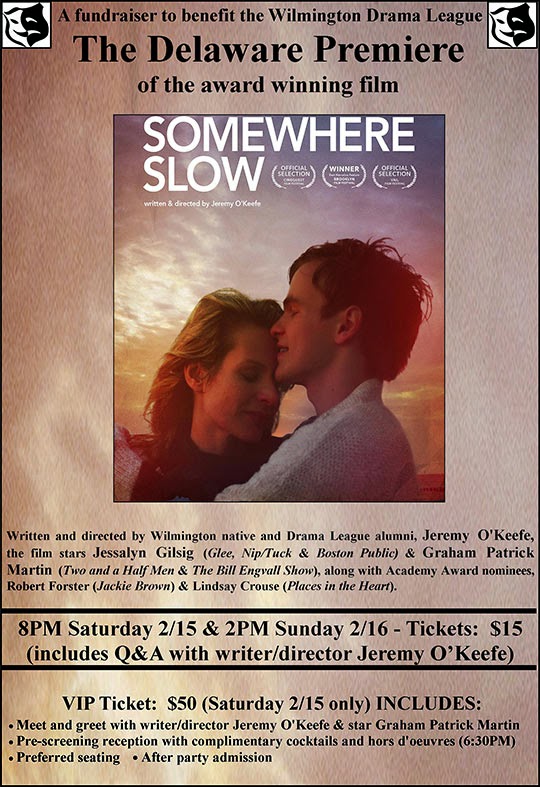 More than a screening, the premiere is your chance to meet the writer and director, Delaware native Jeremy O'Keefe and star Graham Patrick Martin, while raising funds for the Wilmington Drama League.

Somewhere Slow is O'Keefe's second feature film, and the second to take place at least partially in Delaware (his first feature, Wrestling, was shot on location in Wilmington).

There is no better place than Wilmington Drama League for the Delaware premiere of the film the Los Angeles Times called "frequently affecting and mordantly funny" and the New York Times declared "wonderful."

"The WDL gave me my first opportunity to write and direct back when I was 12, and then each year after that before I went to college," says O'Keefe, who grew up in the Highlands/Trolley Square neighborhood and attended Cab when it was still only a middle school and graduated from A.I. du Pont in 1998. "I directed a young Keith Powell ("30 Rock") in the one-act play festival and a young Aubrey Plaza in my mainstage production of Here's Love -- and it was the belief of the members of the WDL and the community that supports this wonderful and magical theatre that gave me the strength and confidence to pursue the arts at a professional level. I owe any career that I might have to the WDL."

While his debut feature film, Wrestling, was a triumph, Somewhere Slow shows his progression in the industry, as respect for his work continues to grow. The film's stars, who went all-in as producers, make their confidence clear.

"The script grabbed me immediately," says Gilsig. "Sometimes you read something and think, 'I want to go there, I want to explore that story, that world.' Jeremy and I agreed to partner on the project in hopes of pooling our resources and seeing if we could get the film made while retaining the original vision he had. It’s been a long and varied road but entirely rewarding, especially now that it is reaching and audience and they are connecting the story the way I did originally."

Martin, who will be on hand for Q&As after the screenings, was similarly drawn to the script. "It's rare to find a script like this one that felt so raw and real -- there were no gimmicks at all," he says. "It was my first time working as the lead role in a film, which added a certain amount of pressure. Jeremy made me feel completely comfortable and confident in my work. I also loved how he worked more as a collaborator than a director. It was always a group effort and everyone's input mattered to him. That's pretty special."

"I think of the film as a beautiful short story," Gilsig says. "It explores the fantasy of: what if you could just stop the world and step off for a moment? Anna and Travis' love story is unsustainable but it’s a moment in time, and a moment they will be able to refer back to for the rest of their lives. It feels relatable to me. And I hope is an unexpected and effective escape for the audience."

Somewhere Slow premieres in Delaware this Saturday at 8:00 pm and Sunday at 2:00 pm at the Wilmington Drama League. Regular admission is $15; VIP tickets for Saturday evening, including a meet and greet with O'Keefe and Martin, preferred seating, a pre-screening coctkail reception and admission to the after-party, are $50. Proceeds benefit Wilmington Drama League. Purchase tickets via wilmingtondramaleague.org/somewhere-slow/.