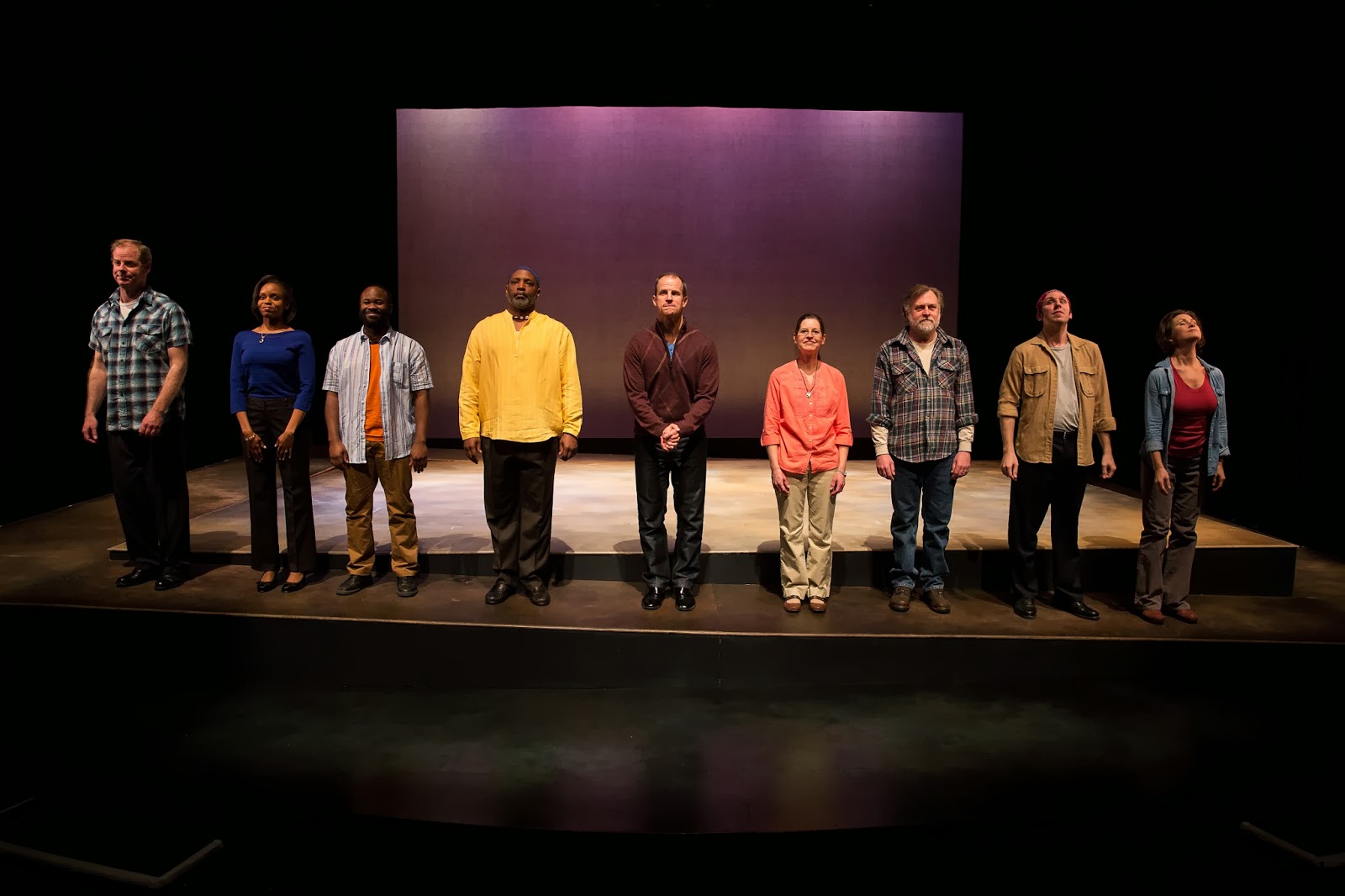 Jessica Blank and Erik Jensen's gripping play The Exonerated explores the unjust treatment six individuals experience with the US legal system. Brilliantly intertwining multiple true stories about individuals who were wrongly charged for murder and sentenced to death, The Exonerated is a 90-minute play that captivates from beginning to end. With a stark tiered set, director David Bradley puts the focus on his actors and the stories they are sharing.

Majority of the play is made up of soliloquies by the ensemble cast. David Alan Anderson, Megan Bellwoar, Akeem Davis, Anthony Lawton, Frank X, and William Zielinski portray the incarcerated characters, along with Tom Byrn, Dan Hodge, Aime Donna Kelly, and Susan Riley Stevens who play various roles, including police officers and spouses of the convicted individuals. Great sympathy is felt for the convicted as they express the sorrow for time lost with their children and loved ones, and
knowing the real murderers are free while they endure imprisonment.

The entire cast gives exceptional performances. Using only chairs as props, the actors have the great task of keeping the audience engaged, which they all successfully accomplish. Not needing a set, the actors fill the stage with their moving stories, which reveal the flawed practices within our justice system and the harsh realities of life in prison.

The previous production I saw of The Exonerated had the cast sitting in a row of chairs reading the script, similar to DCT’s wonderful production of Love, Loss, and What I Wore. However, Mr. Bradley has his actors moving and at times interacting in small scenes. (Only Mr. X wasn’t able to participate in the interaction with his fellow actors. Unfortunately, he fell when exiting the raised stage the day before the performance I attended; leaving him injured. Being a real professional, Mr. X sat in a chair on the side of the stage performing his role as an 18-year-old African-American man who was convicted for a murder based on the color of his skin.) Having the actors in motion added a new element to the play that brought it to life. This production feels complete rather than just a reading.

The Exonerated runs through March 9, at The Delaware Theatre Company. Visit www.delawaretheatre.org or call 302.594.1100 for additional information and to purchase tickets.
Posted by Charles "Ebbie" Alfree III
Email ThisBlogThis!Share to TwitterShare to FacebookShare to Pinterest