Wilmo Rock Circus -- The Biggest Show in the Small Wonder

Pop-ups -- one night events in a space that wasn't a venue before and won't be one after -- are all the rage, or so I'm told, and Wilmington is in on it. The concept isn't new to Delaware, not that that's a bad thing. Before there was a Queen or a Mojo 13, when venues allowing original live music were few, there wasn't much choice but to "pop-up" shows in barns or basements around here. And while, of course, it's awesome to have so many actual permanent venues that support original local music in Delaware, there's nothing like taking over a warehouse for one night.

The format for Gable Music Venture's Wilmo Rock Circus, held in an empty storefront in the Shipyard Shops, was literally taken from the big top. Instead of three rings, there were two stages, complete with ringmasters to introduce the acts. The purpose of this circus-like setup, aside from a carnival-like feel, was circus-like pacing: The performances alternated from stage to stage, leaving no breaks between bands, allowing ten 30-minute sets in five hours. A fast pace, yes. And that was part of the excitement. 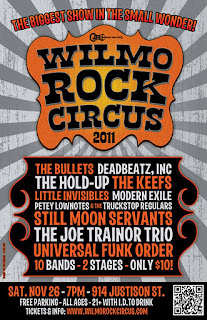 The other part of the excitement was the mix of bands. This wasn't a funk show or a punk show, prog, alt. pop or rockabilly -- it was all of the above. So if the band on stage wasn't your thing, you could go grab a drink, maybe use the powder room generously offered by Timothy's or wander the room and socialize, and a new, likely completely different, band would be along in a few minutes. I have my taste preferences, but I didn't hear any band that didn't do what they do well. These bands -- The Bullets, The Hold-Up, The Keefs, Pete Lownote and the Truckstop Regulars, Modern Exile, Deadbeatz, Inc., Little Invisibles, Still Moon Servants, The Joe Trainor Trio, and Universal Funk Order (thank you WRC Facebook Invite for all the links) -- are some of Delaware's best, and the opportunity to see them all in one night was one not to be missed. If you did miss it, don't worry. Gable Music Ventures plans more pop-ups in the future, but where the next big show will take place is anyone's guess.

"Like" Gable Music Ventures on Facebook for upcoming shows, including regular performances in LOMA hotspots such as Extreme Pizza, Zaikka, and the Film Brothers Co-op.
Posted by Holly Quinn
Email ThisBlogThis!Share to TwitterShare to FacebookShare to Pinterest