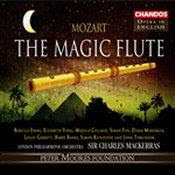 Although they had produced Mozart’s Magic Flute in the recent past, OperaDelaware put a new spin on this latest production. They started in an 18th Century art museum and had Prince Tamino wake up in the 1950s. This made way for some silliness which was fun and still in keeping with the comic intent of the master who created it.

Alok Kumar played Tamino with the same strength and vigor he had given to Alfredo Germont in last year’s La Traviata. His very strong voice and thorough preparation for the role made his character believable in spite of the extremes to which the opera goes to promote the principles of the Masons.

The three ladies of the Queen of the Night (Veronica Chapman-Smith, Melody Wilson and Charlotte Paulsen) stole the show for me with their close harmony, perfectly paced singing and gestures. Their comic romps were hilarious and kept everyone laughing.

The ladies were perfect foils for Papageno, brilliantly played by Sean Anderson. Anderson is not only an excellent singer, but also a great comic. He actually played harmonica rather than letting the orchestra dub his miming, and this bolstered the effect of his comic role. His voice blended seamlessly in his duet with Pamina (Susan Nelson) and his comic verve provided a vector for her to show her comic side, too.

Susan Nelson has a beautiful and well-trained voice and was able to convey a wide gamut of emotion in her singing and her acting. She has control, expression and strength enough to come through strong and clear in her duets with Tamino, the musical culmination of the show.

A fun and polished performance supported by an excellent orchestra was made all the more immediate to me by Stefan Kozinksi and Nicolas Muni’s skillfully wrought English translation of Emanuel Schikander’s original German. The next performances are Friday, November 4 and Saturday, November 5 at 7:30 at the Grand Opera House.