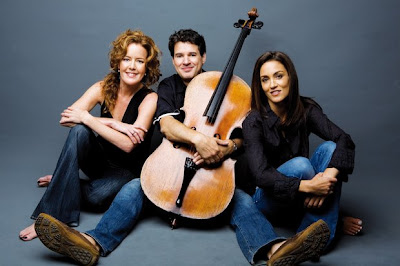 Coastal concerts, a determined group of volunteers in Lewes, has fulfilled their mission of bringing quality music to Southern Delaware. November 19’s concert with the Lincoln Trio was of a quality you would expect in a large city, yet without the hassle and expense.

The Lincoln Trio, formed in 2003, is an ensemble-in-residence at the Music Institute of Chicago. Desirėe Ruhstradt, violin, a graduate of the Curtis Institute of Music – David Conifer, cello, a graduate of the Royal College of Music in London, and Marta Aznavoorian, piano, who studied at both Indiana University and the New England Conservatory not only have the chops to play anything you place in front of them, but they click together– listening and anticipating each other and sensing intuitively where their partners are taking the music and who will lead which phrase.

The Beethoven Piano Trio in D Major, opus 70, number 1 was executed smoothly and quietly – a pristine beginning. By the second movement, you could hear a pin drop in the hall and the Presto passages flowed like oil. The Jennifer Higdon Piano Trio (2003) starts with chords that Aznavoorian voiced masterfully, letting each tone ring for just the right amount of time. Silver Dagger (2009) written for the trio by their friend Stacy Garrop was much more of a twenty-first century adventure – the daring bonging of the piano strings with the pedal down and the strident bowings by Ruhstradt and Cunliffe created both the flavor of the country tune and the exploratory tonalities of new music.

They crowned the concert with Bedrich Smetana’s Trio in G Minor, Opus 15 – a fiery technical challenge which they played without restraint, bringing out the true melodic ringing of Smetana’s harmony and putting so much into the piece that the audience roared in response – demanding an encore with their standing ovation. The trio played Café Music by Paul Schoenfield with a bit too much speed, but the audience lapped up the jazzy delight.

The concert hall is perhaps a bit unconventional – a large church assembly room with a platform for the artists on which a lovely Steinway sits on a raised box flanked by two standing lamps. The sound was live enough so that the piano had more than its share of the combined dynamic, yet Aznavoorian played so well who could complain?

The next Coastal Concert will present Clancy Newman, cello and Noreen Cassidy-Polera, piano on January 28 at 2 p.m. in the Bethel United Methodist Hall. Why not make it a beach weekend and enjoy walking to a world class concert after lunch?