Twisted Times: The Pillowman at Bootless 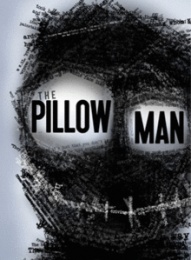 Katurian K. Katurian just wants to share his stories with the world -- which, for him, happens to be a totalitarian police state in the far-off future. He finds himself in an interrogation room with two brutal police officers questioning him about his short stories. But what starts off as a seemingly typical dystopian storyline morphs into a twisted tale of torture, innocence, art and brotherhood. Is Katurian being interrogated for expressing himself creatively, or is it something darker -- something any good cop would investigate? The roles that seem so clear-cut over the first half hour of The Pillow Man, Bootless Artworks' second show in their first season as a professional theater, become more complicated as the show progresses.

Written by Irish/English author Martin McDonagh and directed by Daniel Student, The Pillow Man follows Katurian and his brother Michal (who has the mental capacity of a young child) through a nightmarish day in prison. As Katurian, Sean Close is a sympathetic everyman who lives for his art. Katurian's stories are sick and twisted, the result of a shocking childhood. Michal, played by the engaging Kyle Yackoski, is the only family he has, and his biggest fan. They are lorded over by the two police on their case, Detective Tupolski (Jim Ludovici), the "good cop," and Detective Ariel (James C. Jackson), the "bad cop." As the show progresses, the seemingly caricatured cops develop in unexpected ways. Villains become anti-heroes, and maybe even almost-heroes. It's up to you to reconcile their brutality, and the (possible) brutality of the brothers.

Everything in The Pillow Man hits the mark, from the performances to the set design to the sound, lighting and video. TV screens survey the action at times; at others, they enhance the stories.

Katurian's stories are shared, sometimes told within the scenes and sometimes told with the aid of some very creepy  Little Bunny Voodoo puppets. The stories within the story are like mortar -- without them, the larger piece wouldn't hold together. The title character, the Pillow Man, is a creation of Katurian (or is he?) who benevolently aids in the suicides of young children who are doomed to lead horrific lives. When they say this is a black comedy, they mean it -- this  is about as dark as it gets. It's closer to horror, really. If you can take it, this is a show you should not miss.

The Pillow Man runs through April 9 on Fridays and Saturdays at 8:00 p.m., with a 3:00 p.m. matinee on Sunday, April 3, and a an "Industry Night" on Thursday April 7 at 7:30 p.m. Shows are located at Bootless' temporary site at 980 Justison Street in the Shipyard Shops (just past Planet Fitness). Tickets are just $16/$12 for seniors and students. For tickets, call (302) 887-9300  or e-mail the box office at  bootlessinfo@gmail.com.
Posted by Holly Quinn
Email ThisBlogThis!Share to TwitterShare to FacebookShare to Pinterest
Labels: Bootless Artworks