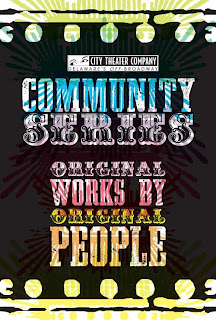 What do you get when you mix one writer, four directors, 15 actors, 17 short plays and a DJ? An evening of B-Sides, Rarities and Unreleased Tracks at the City Theater Company. The title of the collection infers a rock music theme -- and while a couple of the shorts are about popular music in one way or another, it's more metaphorical. The short plays by Alex Dremann, each under ten minutes long (in some cases, well under), are small bites, individual "songs" that don't necessarily connect, but go together like an album.

Dremann's plays, directed by Kathy Buterbaugh, Josh Hitchens, Todd Holtsberry and James Kassees, are comic, while at the same time very dark. We meet a serial killer who bowls people to death, a mental patient about to eat his one friend, and self-aware zombie throwing a cocktail party for his less sentient friends. A recurring theme is interpersonal relationships, especially love relationships between a man and a woman (a couple of the shorts do have gay themes, but these also involve men with women, at least for the moment).

Most members of the cast played multiple roles in different plays, but some pairs, such as Brian McAleese and Amanda Bernhardt and Tim Donovan and Mary Catherine Kelley, appeared together repeatedly. There are a couple of solo pieces -- Greg O'Neil in "Cantaloupe," Kat J. Simon in "Elvis at Stuckey's" and Becky Balaguer in "Chum," but most are shorts for two people. My favorites? Probably "On the Floor," "Cantaloupe" and "Zombie Asthete."


B-Sides, Rarities & Unreleased Tracks will have its second and last two-day run this weekend at the Black Box at Opera Delaware Studios -- don't miss it!
Posted by Holly Quinn
Email ThisBlogThis!Share to TwitterShare to FacebookShare to Pinterest