Copeland String Quartet and the Art of the Quartet 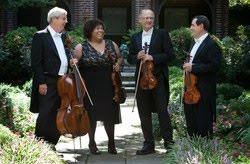 The Art of the Fugue has long been a challenge to keyboard artists, trying to play different voices in the fingers – but when the Copeland String Quartet plays it as a quartet – each voice takes on its own timbre and texture. Mark Ward had his colleagues play each theme and voice before they played eight of the twenty of the fugues Bach wrote in his Art of the Fugue.
The musical blend had the grace of four independent players – each trading the fugal voices, which wove a tapestry of sound throughout the stone church. The last fugue, as we had been warned, was not finished and they played it to the last notes Bach had written which inspired the audience to loud applause, a proper salute to Bach who was born 326 years ago this month.
The Schumann String Quartet in A major, Opus 41, No. 3 was a major scene change. Where Bach had created four independent voices for fugal polyphony, Robert Schumann was thinking in chordal harmony – making his quartet like his piano compositions. In the Andante espressivo, the first violin plays an A against the second violin’s held G – before the second moves to the A. Only professionals can tread this murky water and Eliezer Gutman and Tom Jackson had that harmonic tension and resolution beautifully controlled.
The quartet managed the Assai agitato with its many tempo, meter and mood changes without a hitch – communicating all of the dynamic and mood changes. You can feel that they have worked together long enough to sense each other’s tempi and expression.
The viola and first violin playing the melody over the ostinato of the second violin and the well-placed pizzicato of the cello were highlights in the Adagio molto and they took the Finale with no holes barred on speed – yet their ensemble was fluid as they built to a smooth and musical crescendo.
The quartet has two CDs out (see web site) and their next Holy City concert will be on May 22 at 4 p.m.
See www.copelandstringquartet.com.
Posted by Margaret Darby
Email ThisBlogThis!Share to TwitterShare to FacebookShare to Pinterest
Labels: Church of the Holy City, Copeland Quartet