Copeland Plays Shostakovich and Then Some 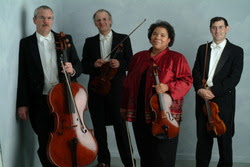 Hurray for the clean and light rendition the Copeland String Quartet gave to the String Quartet No. 43 in G Major, Opus 54, No. 1! No cloying rubatos, just the smooth tones of Eliezer Gutman as he played the theme to the Allegro con brio. In the Menuetto allegretto, Mark Ward’s cello solo was majestic – reminding me of the fugue in the Emperor quartet. The finale presto had lots of wonderful ensemble playing at quite a clip until it suddenly ended in a whisper.

The String Quartet No. 8 in C Minor, opus 110 by Dmitri Shostakovich takes us to entirely different musical territory. The five short movements are played without interruption and Shostakovich wrote so that each instrument blends with the others but also has its own share of the theme, which recurred throughout the quartet – especially in the first and fifth movements. The quartet interpreted the sudden changes in style and mood seamlessly while appearing to have fun in the process.

The outrageous speed of the allegro molto demanded both technical prowess and the ability to see the shape of the piece as it unfolded. The allegretto gave them a merry chase as well – Eliezer Gutman had the macabre dance theme and Nina Cottman played double stops on the second and third beats as Mark Ward had the downbeat of the waltz – then Cottman and Ward each had the waltz accompaniments alone.

Tom Jackson and Gutman were perfectly matched in the very fast passages filled with half-steps and usually a fourth apart. How do they stay in tune? The chorale writing of the last two largo movements was beautiful and heart-wrenching. When it ends, you don’t know whether to feel sad or happy. I just know I was happy to hear it and delighted that Delaware has a group that can play these extremely demanding pieces.