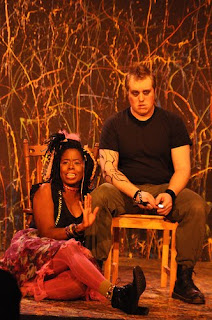 Well cast is the show, with the actors revealing their raw, often lustful motivations. Dale Martin, Jr. sings Todd with warmth and power. Todd’s obsession with his barber’s blade, and its potential for retribution is the artery connecting each player and vignette in the tale. TS Baynes is a vocal powerhouse in her wickedly playful Mrs. Lovett. Tyler Hoffman (Pirelli) is riotously funny in the shaving competition scene, singing “You clip-a da chin. You rip-a da lip a bit.”

Aileen Goldberg is heart wrenching as the Beggar Woman, who has been reduced to insanity by life’s cruelties. Only she, Anthony and Johanna (both sung well by Brendan Sheehan and Lauren Cupples, respectively) do not succumb to the greed and bloodlust that envelops the others. Steven Weatherman plays a sorrowful Judge Turpin, who is unable to see wrong in his pedophilia. Tobias, played by Michael Jahil, is touching as he sings his song of blind devotion to Mrs. Lovett, “Not While I’m Around.” Brian Couch provides comic relief as Beadle, when he tests out Mrs. Lovett’s invisible harmonium, singing ridiculous snippets of songs. Maggie Coswell’s strong voice is excellent in the ensemble. The show runs through December 19, 2009.