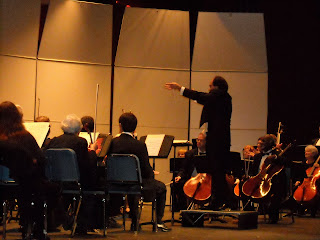 Bad weather did not keep a large crowd from coming to the Independence School to hear musical director candidate Simeone Tartaglione conduct the second Newark Symphony Orchestra concert of the season. Tartaglione told the audience, “If I get the job of directing this wonderful orchestra, I would like to know what you [the orchestra] want to play and what you [the audience] want to hear.”

His version of Smetana’s The Moldau (Vitava) from Ma Vlast (My country) was quite fast. Crystal Norman’s flute brought the symphony in with gusto, but softly enough that the string pizzicato line came out delicately. The woodwinds excelled as both flutes (adding Dorothy Boyd) and two clarinets (Anthony Wastler and Shao-Tang Sun) played together in thirds and sixths.

Jeffrey Lang, Associate Principal Horn of the Philadelphia Orchestra, was able to show his beautiful French horn tone as the acoustics of the hall were great for the Horn Concerto in B-flat major by Reinold Glière. The violas deserve special praise for their clear melodic lines (how rare that they get any) and Anna Montejo played a haunting oboe melody. The soft dynamics the orchestra was able to achieve meant that everything could be heard clearly.

The Brahms Symphony No. 1 in C minor was the pinnacle of the concert. Tartaglione introduced the piece as a story of Johannes Brahms’ unrequited love for Clara Schumann which made it all the more vivid for the listener. Sally Cornell’s oboe playing was clear and smooth. Having four excellent horns was also a great bonus for an amateur orchestra. Mordecai Furhman’s timpani entrances were clear and rhythmic, spot on. And to have the alto (James Olson), tenor (Frederick Unruh) and bass trombone (Phillip Hessler) parts played that well in the chorale was quite an accomplishment.

The audience demanded an encore and got one: the Brahms Danza Ungarese No. 5, conducted with giant retards and accelerandi, making it a lusty end to a great concert.