Mastersingers of Wilmington at First and Central Presbyterian Church 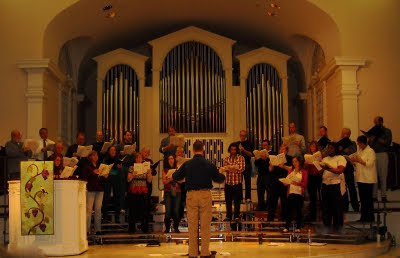 On Saturday, November 7, at 7:30, David Schelat and his Mastersingers will present In Memoriam – Songs for the Loving Departed. I snuck into a rehearsal to bring you a preview.

The reverberant room lifts the tenor voice for Selig sind die Toten (Blessed are the dead) by Heinrich Schutz and you are transported to the sounds of a European cathedral as the other voices enter and weave the harmony of the early baroque master. The John Sheppard In pace in idipsum continues the European baroque mood, but this time in the English Tudor chapel.

But don’t be lulled. Three pieces by Pavel Chesnokov, a twentieth century Russian composer, sung in Church Slavonic will bring you out of your reverie. Chesnokov, whose works David Schelat recently discovered in the Musica Russica edition, was a composer and choirmaster who struggled to pursue his profession from the Bolshevik Revolution until his cathedral was destroyed during the Stalinist era. Soloists Margaret Anne Butterfield and Charles Warrick provide a delicate cantor line for the second piece.

Organist Marvin Mills accompanies the last two pieces. He keeps a fairly simple and quiet registration for the Bach double-choir motet, Komm, Jesu, komm, letting the myriad voices of the choirs take the fore while providing a basso continuo.

But the organ is a principal voice in the Alfred Desenclos Messe de Requiem which exults in the French twentieth century lush and wild harmonies reminiscent of Ravel and Poulenc. The soloists Katherine Supina, Marjorie Eldreth, Charles Warrick and Paul Stamegna and the rest of the choral group negotiate the pitches without a hitch, showing that they indeed have earned the name Mastersingers.