Greg Barkley at the DCCA 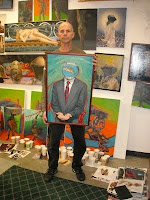 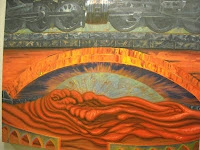 Tired, dragging myself upstairs at the DCCA and feeling rather hungry after a long day’s work, I spotted two red objects: one, a tempting bowl of salsa and two, a large painting of something very red and a train in the top third – a train with vivid detail mixed into the steel-grey colors of its pistons and driving axle with a little bit of rust and wear mixed in.

Feeling grateful for both the salsa and the vivid color, I wandered in to Greg’s studio and found out he is from Delaware and studied at the University. His teachers, Stephen Tanis, Julio DaCunha, and Charles Rowe – gave him soft realism, romantic and surrealistic models. He has had a studio in the DCCA for a few years now and had a book of Francis Bacon he is perusing.

He genially posed for the piece that I was so taken with of a man in a business suit with a fishbowl for a head and tipped a diptych of a dog with a violin head so I could get a picture without too much glare. The dog is so black and the bright green beneath him makes his dark coat even more striking. The violin seems to be a weapon of sorts – incongruously intriguing in the bullring setting.

Barkley has one thought about his art: ‘I wish had more time to do it. ‘He and Ken Mabrey are scheduled to have an exhibit in the downstairs gallery at the DCCA in January.

I look forward to an uncluttered display of Mabrey’s farms, birds, trees and whimsical pastels as they stand their ground against Barkley’s biting Magritte-esque visions.