Pick of the August Art Loop 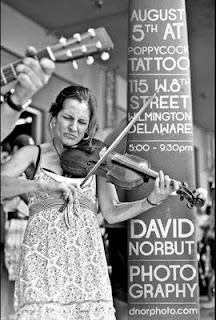 Holly says: If you follow local music in Delaware (or if you follow this blog regularly), no doubt you've seen David Norbut's work. This month, Poppcock Tattoo at 115 W 8th Street in Wilmington hosts a selection of his photography, with a focus on his Western series of landscapes, nature and portraiture -- with a couple of his stunning live band photos in the mix, as well as a video incorporating a larger selection of photos. Norbut has a great eye in any location, not least of all the sweeping, sometimes weathered beauty of the American West, leaving me wanting more.


Margaret Says: Holly’s venture into Poppycock Tattoo to see David Norbut’s photography and wanting more made me conscious of Michelle’s admonition that we should find some new venues….which I tried to do.  I started on Lower Market to see what the LOMA Coffee House was doing – a few works by Catherine Mulrooney were all I could see from the street and earsplitting music coming out of an electric guitar and enhanced by the guitarist’s plananx of bass pedals.  Didn’t dare enter as I didn’t have my earplugs on me, but it was obviously happening.  Went to Dimensions and Co. by Ace to see a few Underground Comixxx by Jabar Brown, who was by himself eating pizza out of a box and chatting on his cell phone….Venture Creative Marketing Group was firmly closed – unlike the framer next door who tried to call to find out if Venture was going to open later.  But it was all happening at 919 Market, so it was worth hiking up the hill – hearing more earsplitting music from the Queen (holding my ears even a full block away where we encountered a hip guy asking us where the music was coming from)….and walking into 919 to find a great party going on!  A big cake, lots of snacks and lively art by Yakime Brown – a friendly guy in a porkpie hat who strode right up to say hello.  It was fun telling him which pieces I liked best and hearing how he felt about those same pieces.  His textures are shiny, acrylic paint for the most part – either done in an explosive circle, seemingly shot from a cannon or made into flowerlike petals with his palette knife.  Yakime Brown also has a considerable variety – with some pieces of staid stripes in a flat mode.  Originally from Brooklyn, Brown has been living in Bear for the past few years and has quite a following.  AND it seems that the new curator of 919 is ready for things to hop.
And, there was new life in the DCCA with the completion of the Movable Feast project by interns  Jung-A Woo and Hoyun Sun.  When I arrived, teenagers from the Latin American Community Center and their teachers were buzzing around outdoor tables cooking on hotplates to show what they had learned about food and culture .  Woo and Sun had a film loop explaining the project and the kids photographs and art were displayed in the DCCA lobby.  But the real fun was watching the poise and pride of the kids as they prepared and served foods they had learned about during the six-week project.
My conclusion is that you can always find new surprises in the Art Loop.  Can’t wait for the next one because, like Holly, it left me wanting more.