By Mike Logothetis
"Logo" grew up in North Wilmington, performing in school and local theater productions. He lives in Newark, but you can find him wherever the arts are good.

Party at the pub like it’s 1993 with City Theater Company (CTC)! CTC wraps its 25th season with “Pub Plays” — a love letter/throwback to the company’s early days downtown at O’Friel’s Irish Pub. In fact, former pub owner Kevin Freel acts as a host/historian for the production, speaking at the onset and at other intervals between the five short plays.

The evening showcases a full program of plays in a nod to CTC’s tradition of comedic, experimental, and new works. Both Delaware and national playwrights’ works are presented.

The featured plays (in order) are: Sure Thing by David Ives; Beef Junkies by Jonathan Dorf; Green Eggs and Mamet by Matt Casarino; All About Emily by Drury Pifer and Betty by George Tietze.


Tietze is also the director of “Pub Plays.” His Betty is a new original work, in which he stars as David along with Adiah Simpson (HerBot6000) and the disembodied voice of Mary Catherine Kelly (Betty). The work provides an interesting look at artificial intelligence (or a higher being?) trying to be human, but unable to understand the subtleties of humanity. Simpson’s physical performance is superb. Her neutral face with programmed expressions and movements is mesmerizing. Tietze’s David is a sympathetic character, but also makes the audience wonder if this setting is in a prison or sanitarium or futuristic apartment complex. The staggered ending is a clever theater construct which adds to the story and the underlying question about the nature of the relationship between David and Betty. 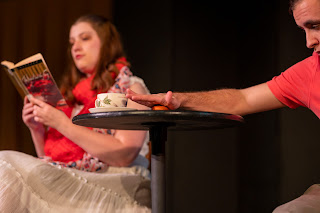 Another good pairing of actors was in the opening Sure Thing starring Rebecca Cook and Anthony Paparo (photo at right). David Ives has written a comedy of opportunity and potential happening between a man and woman during a chance encounter. Bill and Betty may or may not be looking for companionship in a series of micro-conversations (along one arc) with alternate reactions and results. It’s a fun mixture of Groundhog Day and Mad Libs.

Paparo has a sleezier turn in a second two-actor play with David C. Hastings. Green Eggs and Mamet is Delaware playwright Matt Casarino’s experiment in rewriting Dr. Seuss’ "Green Eggs and Ham” as if David Mamet had penned it. Clever wordplay, literary references, and mystery bounce between the two men who meet at a bar. There is a lot of cursing that rhymes!

Beef Junkies is a twisted and bizarre tale by Jonathan Dorf that seems to take place in an apocalyptic future devoid of meat — beef, chicken, pork, fish, and ostrich(!). Kerry Kristine McElrone (Cowgirl) twitches her way into your brain, jonesing for freshly killed beef from the last cow on Earth. Her partner in crime is Tietze (Cowboy), a conniving man intent on getting his due through any means. Shepherd, played by Christopher Banker, is the only sympathetic/kind character and is willing to do anything to protect his charge. Can Betty the Bovine and Sal the Salmon be saved?

The late Drury Pifer’s All About Emily takes a long path to make a straightforward point about the not-so-disparate world of academic minds and mental institutionalization. From the get-go, the audience knows zaniness is afoot with the male characters being played by women and the women by men — save for the lone, sane PhD student Cindy, played by Cook. Professors McClack (Allyson Sands), McDingbat (Tricia Sullivan), and Nougat (Kelly) speak nonsensically with conviction based in their learned heads. Sentences like: “I only give A’s…Why subvert the system?” dominate the stage, along with a lot of flies to swat! Emily Dickinson (Banker) is a joy to watch spew bizarre statements (about seducing cabbages) while in feminine poses. But the overarching joke gets stale and runs a tad long even with the actors doing wonderful physical comedy. I can only conclude by saying, “Aloha!”

CTC specializes in intimate, immersive theater, and “Pub Plays” is able to connect with the audience through these five interesting vignettes. City Theater Company has more production space in Studio One than in its previous “Black Box” location, but the action remains in the forefront and close to the audience.

A bar set inside the "pub" offers a wide selection of soft and alcoholic drinks to enjoy during the show. Twin Lakes Brewery Company will provide complimentary beer tastings at the May 3 and 4 performances.

“Pub Plays” continues tonight (April 27, 2019) and will conclude its two-week run from Wednesday through next Saturday (May 1-4, 2019). All performances begin at 8:00pm. The show runs about 2.5 hours, which includes one “Colossal CTC Bonus Super One-Time Scene Change.”

City Theater Company’s new home — Studio One at the Grand Opera House — is located at 818 North Market Street, Wilmington, DE 19801. General admission is $30, and tickets can be purchased at the box office or online. Special ticket pricing is available for military personnel, students, and youth (ages 15 & under). But be advised for younger audience members: Some content contains coarse language, alcohol consumption, drug references and sexual situations.

Call The Grand Box Office at 302.652.5577 or visit thegrandwilmington.org for details.

Chicago at the Wilmington Drama League

The orchestra was perched on a rooftop in a brilliant set design by Kurt Kohl which let the audience see them and made them part of the show. As soon as we were seated, Chris Tolomeo and his jazz orchestra started some warm-up numbers from his CD to set the feeling of 1920s speak-easy. Then Kitty (Leeia C. Ferguson) came out in a gangster’s raincoat to do the house announcements in a well-written 1920's patois – letting those dancer legs peak out through the thigh-high slits.

Lights down, then up again showing back of a dancer who starts 'All that jazz' using the brilliant choreography created by Jody Anderson - whose 2007 Candlelight Theatre production of Chicago won the Philadelphia Theatre Alliance Barrymore Award. Not only were all the dancers top quality, but the production on opening night was as tight as anything I have seen in Delaware. Yet it was Barbara Wright's perfect cold stare/warm smile combination as Velda Kelly that made the show for me. I had seen Catherine Zeta-Jones in the film but I was even more captivated by Ms. Wright's dancing and her ability to give that "I'll-smile-when-I-murder-you" look throughout the show.

Watching a few clips of the movie showed me that although the fade-ins and technical gloss give it polish, there is a dimension missing on film that you get with live theatre that I could hardly describe. When Billy Flynn, the shyster lawyer (Jeffrey Santoro) does his shtick with the dancing girls and feathers - your mouth is still hanging open and asking: can this be Delaware? The well-seasoned musical backbone of the Tolomeo orchestra gave a tremendous boost to the smoothness of entrances and dancing.

Music Director Steve Weatherman and Choreographer Jody Anderson deserve much praise for this well-rehearsed show, but credit for coordinating the entire production goes to Director Matt Casarino who said he had never had a show so ready on opening night. The casting, the music and the dancing are so good that I highly recommend you catch a show during the run concluding November 13. 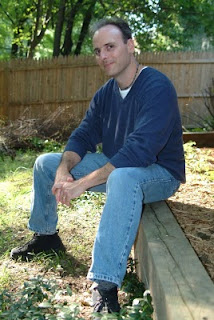