In Heaven with Brandywine Baroque

By Christine Facciolo
No other composer in the history of Western music compares to J.S. Bach. He excelled in virtually every genre — except opera — and invented quite a few himself, including the keyboard concerto. 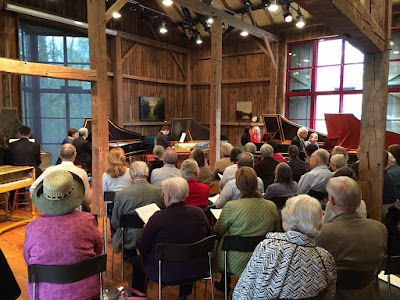 Brandywine Baroque devoted the entire program of this year’s Harpsichord Heaven to a performance of the composer’s complete set of concertos for one, two, three and four harpsichords.

Although the piano has dominated the concerto literature for more than 200 years, the keyboard came late to the ranks of concerto soloists. Baroque composers generally regarded the harpsichord as a “utility” orchestral instrument; one that filled in harmonies as opposed to presenting melody. Even Vivaldi — who composed more than 500 concertos — never wrote one for the harpsichord. (He did, however, manage to compose one for the lute.)

Bach was probably the first to compose concertos for the harpsichord. But even these are re-workings of his compositions for other instruments, usually “melody” instruments like the violin or oboe.

As it does every year, the festival brought together an impressive roster of performers and scholars. In addition to Founding Artistic Director Karen Flint, the event featured harpsichordists Davitt Moroney, Arthur Haas, Luc Beausejour, Janine Johnson, Leon Schelhase and Joyce Chen.

The true stars of the event were the harpsichords, as Moroney stated in his pre-concert remarks. Instruments from the Flint Collection included two by the famous Flemish manufacturer Ioannes Ruckers (Antwerp, 1627 & 1635), one by Nicolas Dumont (Paris, 1707) and a recently acquired representative by father-and-son harpsichord builders Nicolas and Francois-Etienne Blanchet (Paris, 1730). Filling out the quarter was a representative by Joannes Goermans (Paris, 1748) on loan from a private collection. The instruments were chosen because they contain d’’’, the highest note of Bach’s harpsichords, explained Moroney.

Oddly enough, the event opened with a performance of the Concerto in A minor for 4 harpsichords, BWV 1065, a faithful transcript not of a Bach composition but of Vivaldi’s B minor Concerto for Four Violins (Op. 3/10). Bach, however, makes it his by expanding both the counterpoint and harmonies and imbuing the solo parts with greater complexity and clarity. Of particular interest is the middle movement where each soloist — Moroney, Flint, Johnson and Chen — produces a different kind of arpeggio on a central propulsive fragment.

Concerto in F minor, BWV 1056 is believed to have been based on a lost violin concerto in G minor. It is unusual in that it sets the soloist off rhythmically from the orchestra, with the strings playing in strict 2/4 time and the soloist playing almost exclusively in triplets. The lovely second movement provides a lyrical respite before a return, with only a slight pause, to the rhythmic vitality of the final movement, replete with felicitous echoes between soloist Luc Beausejour and the orchestra.

Arthur Haas and Leon Schelhase joined together to perform the Concerto in C minor for two harpsichords, BWV 1062. Bach’s well-known Double Violin Concerto in D minor, BWV 1043 provided the basis for this transcription. The opening and closing movements feature much contrapuntal weaving of themes. As for the middle movement, the orchestra takes a back seat as the soloists engage in a kind of Baroque vocal duet. This beautiful movement seems both intense and calm at the same time and one could easily see the emotional involvement on the faces of violinists Davids and Huizinga.

The mood brightened as Karen Flint offered the Concerto in A major, BWV 1055. As always, Flint’s playing was flawless. The outer movements of this concerto are lovely but the middle movement is unbelievably beautiful for its extremely long musical lines which weave so deftly when played, as here, at the proper tempo.

The highlight of the evening, though, was the less hummable — but most frequently performed — Concerto in D minor, BWV 1052. In this virtuosic tour-de-force, Janine Johnson and the accompanying strings wholly delivered on the drama and high-speed prowess of the outer movements, while reaping all poignancy of the middle movement.

A Bit of Musical Heaven, Courtesy of Brandywine Baroque

By Guest Blogger, Christine Facciolo
Christine holds bachelor’s and master’s degrees in Music and continues to apply her voice to all genres of music. An arts lover since childhood, she currently works as a freelance writer.
Brandywine Baroque topped off its 2014-2015 season as it has in years past with Harpsichord Heaven, a weekend festival featuring lectures and concerts by noted musicians and scholars from across the U.S. and Canada. 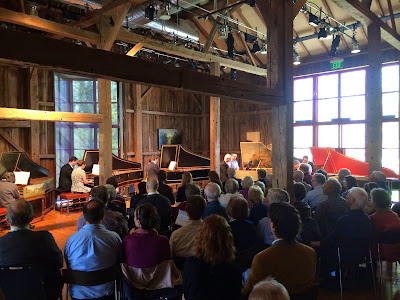 Brandywine Baroque founder and artistic director Karen Flint kicked off Saturday’s “marathon” with a concert of works by Jacques Champion de Chambonnieres, the founder of the French harpsichord school. Each of the 10 visiting harpsichordists then presented 40-minute concerts every hour on the hour. The day culminated with a Bach recital performed by British-born harpsichordist/scholar Davitt Moroney of the University of California at Berkeley.

But if you were pressed for time — or in the mood for something a bit more adventurous — Sunday’s Grande Finale performance was your ticket. This extravaganza brought all 10 musicians up front playing on five vintage harpsichords from The Flint Collection. The concert offered a cross-section of styles from across Europe, including Great Britain, Germany, France and Italy.

Flint and Moroney reprised their performance of Nicholas Carleton’s Praeludium and a Verse in D for two to play. Only one part of the manuscript exists, so Moroney supplied his part, providing some interesting facts about the piece to the audience.

It was especially pleasing to hear Flint perform her arrangement of Lebegue’s Les Cloches. Although intended for organ, the composer noted that it was “suitable” for harpsichord, and the shimmering tones of the instrument certainly brought to mind church bells.

Twenty hands on five vintage harpsichords provided plenty of opportunities for performing transcriptions. These included the Entrance of the Queen of Sheba from Handel’s Solomon, the Passsacaille from Handel’s opera Radimisto, and Bach’s Brandenburg Concerto No. 2 in F major.

As always, there was a “surprise” in the final performance, and this year the musicians played their version of musical chairs to Handel’s Hallelujah chorus from the Messiah. At times, it sounded as if the audience was going to break out in a full-fledged Messiah sing- along. As with any game of musical chairs, one of the participants ultimately has nowhere to sit. Here that honor was bestowed on Arthur Haas — who rose to the occasion and “conducted” the final bars of the piece.

The Dumont Concerts: Breathing Life into the Baroque

To enter the concert hall at the Barn at Flintwoods is to greet the Baroque era in all its gilded magnificence. Not only a performance and recording venue, the space houses a treasured private collection of antique harpsichords. The collection, ranging from several Ioannnes Ruckers models, a 1707 Nicholas Dumont and a Spanish-made harpsichord, has been carefully restored both mechanically and aesthetically. Each is meticulously decorated with pastoral scenes, flying cherubs, and even shrimp waiting patiently to be consumed. The most recent acquisition – a harpsichord made by Ruckers in 1627 – was unveiled at Brandywine Baroque’s Dumont Concerts, a weekend-long harpsichord “festival”, which concluded on Sunday, May 24.

The Dumont Concerts opened with a wonderful recital by Karen Flint, Artistic Director of Brandywine Baroque. She played several instruments in the collection, taking us on a musical journey both around the room and world. Striking is Ms. Flint’s knowledge of performance practice and musicology. Her program included two works by Elizabeth Jacquet de La Guerre (1665-1729), a composer and court musician for Louis XIV. Ms. Flint played these virtuosic, sometimes contemplative, movements with grace and skill. The evening ended with Davitt Moroney on the 1635 Ruckers harpsichord, joining Ms. Flint in a “four hands” duet by François Couperin (1668-1733).
Olivier Baumont performed a program entitled “Les Clavecinistes versaillais”. An exceptional artist and scholar, Mr. Baumont played works by eight different composers who performed at Versailles, including Couperin, Jean-Phillip Rameau, and an eight-year-old Mozart. After each piece, Mr. Baumont applauded the instrument he had played, reminding us how special and important each of the harpsichords is at the Barn at Flintwoods.
See www.brandywinebaroque.org.
Posted by Arts in Media 1 comment:
Email ThisBlogThis!Share to TwitterShare to FacebookShare to Pinterest
Labels: Brandywine Baroque, Davitt Moroney, harpsichord, Karen Flint, Olivier Baumont
Older Posts Home
Subscribe to: Posts (Atom)