By Guest Blogger, Ken Grant
Ken Grant has worked in Delaware media, politics and marketing for 25 years. He and his Lovely Bride enjoy Wilmington's arts and culture scene as much as they can.
Richard Raw makes it clear, hip-hop is still in its formative years – it is still a young art form, and those who are involved need to change the some of the stereotypes associated with it. 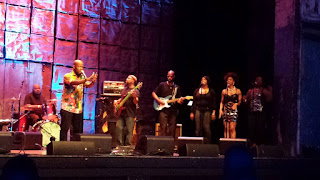 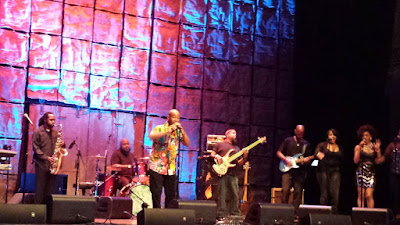 The first stereotype is that hip-hop artists are only out for themselves – whether it’s a matter of proudly proclaiming (in song) how great the artist is or denying any outside help or influence in the business.

At the June 11 Richard Raw CD Release Concert for his new album, Word Warrior, at World Café Live at the Queen, Richard and his team of musicians, singers and friends went out of their way to credit those who have gone before and to pave the way for the next generation of artists. In song, word and action, Richard showed the audience that he benefited from parents, mentors and other artists who made sure he was successful both as a musician and as a human being.


Richard also showcased the talents of other singers throughout the evening. Maya Belardo, Ladyy Defined, Aziza Nailah and Ann Letreece each had time at center stage to share their voices with the audience.
The second stereotype Richard Raw is out to change is the misogynist message some in hip-hop have been parroting.

The entire show was marked with high energy and a sense of purpose – with themes ranging from reclaiming a proud heritage to dealing with oppression in the workplace to advocating for healthy diets and lifestyles.

With the recent passing of Muhammad Ali, there was little doubt about the song Richard would offer as an encore, once again with words of appreciation to a role model.

By the end of the experience, it’s clear that Richard Raw takes the title of Word Warrior seriously – and he’s ready to use every tool at his disposal to fight for his art, for his community, and for the young artists following in his footsteps.

Set List:
Fela Kuti - Lady
Runaway Slave
Rise Up "Part 2"
How We Get So Low/Solo
Lose My Religion
Diamond (by Maya Belardo)
Say Yes (by Ladyy Defined)
On and On (by Aziza)
Shaka Zulu
Watch Your Health
Don't Let Them Take Your Crown
At The BBQ
Let's Groove
Ain't Nothing Like A Woman
I'm Every Woman (by Ann Letreece)
A Song For Mama
Shine Yo Light
Muhammad Ali