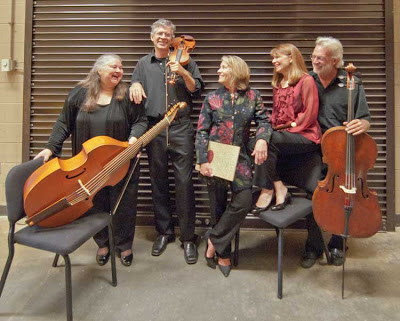 Music in a library? What better way to introduce the public to musical instruments like the gamba, baroque flute and baroque violin? The Friends of the Newark Free Library are devoted to making their library a community education center and they attracted quite a crowd for the concert by Mėlomanie. Over 90 people came to hear the Sunday afternoon concert – many of them brought children.

The group started the concert by playing the first part of La Piemontaise from Les Nations by François Couperin. The room, which has almost no echo or reverberation, was a great venue for the harpsichord, gamba and baroque flute and baroque violin. Each instrument could be heard distinctly, yet the blends of harmony were quite good. Christof Richter’s baroque violin and Eve Friedman’s baroque flute kept a very even match, especially in the Gravement – vivement et marquee. In the Seconde Air, the harpsichord’s lute stop sounded beautiful – and the entire ensemble went from forte to piano in a very natural and easy way to recreate the baroque dynamics.

The concert included two pieces by contemporary composers. The first was an excerpted verision of Dreams (2013) by Sergio Roberto de Oliveira played by Kim Reighley on modern flute and Doug McNames on cello. Oliveira was trying to depict the mysterious world of dreams in a series of musical vignettes. McNames and Reighley managed to hold a strict rhythmic unity – coming in absolutely together after rests and managing the exact same tone qualities on two-note slurs. The entire piece will be premiered on January 19 at Grace United Methodist Church in Wilmington.

The other contemporary piece was Fantaisie Mėlomanie by Roberto Pace which he had written for Mėlomanie in 2009. The clarity of the acoustics really brought out the individual voices in the piece. The groupings of cello, gamba and violin as well as the two modern flutes and violin were well-balanced and beautifully voiced.

The concert ended with the second part of La Piemontaise, the dances. The delicate sounds of the Allemande and the two Courantes were a great introduction to the very low and plaintive sounds of the gamba and low harpsichord notes in the Sarabande. The final Rondeau was a cheerful end to a short and fun concert.


The Friends of the Newark Free Library and Pam Nelson have really given something special to the community when they provide unusual music in a friendly and informal setting.