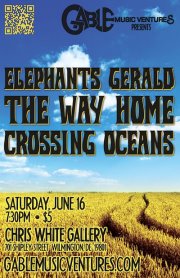 [Author's Note: Elephant's Gerald did not perform this evening.] Arriving at the basement of the Chris White Gallery in Wilmington, I run into Jeremy Hebbel of Gable Music Ventures, one of the two masterminds behind the concert. He tells me to make myself comfortable and wanders off to shake hands and usher more people down to the performance space. Both Jeremy and Gable Co-Founder Gayle Dillman do a lovely job of making you feel welcome and have obviously put a lot of planning into the concert. Bravo, Gable!

I’m left to people-watch, and I take note of a group of four, friendly-looking guys who could easily be your next-door neighbors. They are The Way Home, the first band in the line up. The guys look casual, but sharp; they’re funny, a bit self-deprecating and quick-witted, mentioning that Wilmington brought them in contact with “the biggest picture of George Thorogood [they] have ever seen.”  Band members are guitarist James Hearne, keyboardist Henry Nam, drummer Nick Hughes and bass player Dan Drago.

Their first two songs are originals full of loud crescendos, instrumental interludes that showcase each members’ talents, and four-part harmonies that blow you away. They use these moments to their advantage, stopping the music to use only the power of their voices to move the tune along — a smart choice, in my opinion, since they are brilliant singers, individually and as a group. Next are songs off their album, On So Thin a Line, and they’re equally fantastic. There’s feeling behind the lyrics and the instrumental accompaniment is spot on. The guys even find time to squeeze in a mellowed-out version of Michael Jackson’s “Billy Jean” for a minute. Their lyrics draw from anything they have an opinion on— the hate-able hot weather; the guitarist’s town that felt like its houses would slide down the hills from all the icy winters; relationships they’ve had; even life-affirming sentiments like “do or die” — all were intro stories to the tunes. As their set wound down (and Jeremy repeatedly gives them time-checks), they demonstrated their humor again by telling us this show “feel safe, where the monsters can’t get them,” and promise to return and work with Jeremy and Gayle again. Hopefully, they keep that promise!

The next band comes on in bright, traffic cone-orange shirts. They are called Crossing Oceans, which they explain is because of the lead guitarist, Walter Van Geffen, having crossed the ocean from Ireland to play with them. The drummer, John Clough, describes their sound as, “A little bit sloppy, a little bit bombastic…Delaware style.” When they perform, it’s the opposite of The Way Home — slow and soulful. The lead guitar melody and smooth beats recall a slow dance at a party, club, or long-ago school dance. John intros the next song with a big grin: “Now, let’s do one we stole from somebody…,” proving they’re funny guys, as well. They followed with an original, upbeat rock song that let the guitarists show off. Their next, “Lazy Afternoon,” featured guest singer, Sophie, as back up. Her voice cut a lovely harmony to the drummer’s, and allowed for something a different and definitely striking. They kept pace with what they labeled, “something a little jazzy.” Less vocals and a thumping tune made everyone clap along and made this song one of my favorites for the night. Sadly, they never told announced song’s name, making it impossible for me to hunt it down on the Internet and listen again.
Walter started up the next song, calling it “…something with a story to tell.” It’s definitely rock but has strong Irish roots, especially in the guitar’s melody line. They seemed to stick with the storytelling theme from there. They’re a smooth rock group, for sure. In the end, the audience called for an encore, and they gladly complied, saying, “This is our angry song.” And rightfully so. It was the loudest, fastest-paced one they’d done, changing my mind about talent that lies in the slow and powerful; loud, strong, and powerful works just as well. The lead guitarist took off running with the melody, and the bassist and drummer clearly loved being able to pick up the pace, dancing and grinning their way through the last sounds of the night.
Rock on, Wilmo!