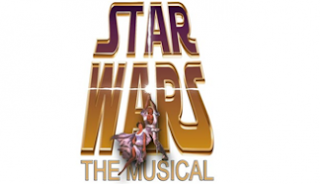 Star Wars: A New Musical Hope, Bootless Stagework's much-anticipated summer show, was timed perfectly. Opening just a week after the Wizard World Philadelphia Comic Con, with its light sabre training classes and the famous 501st Legion of Imperial Storm Trooper costume players, area fans are still mentally in a galaxy far far away -- and Star Wars the Musical is a nice way to top it off.

Don't expect 501st-level costuming (although some of the costumes, most notably Chewbacca and a motorized R2D2, are amazing) -- that's not what this show is about. Adapted by Jeremy Gable, it's a campy parody of Episode IV (known simply as Star Wars to anyone over the age of 30) set to music. Sort of a cross between "Family Guy's" Blue Harvest and a Broadway musical. Funny one-liners are woven into faithful stage incarnations of movie scenes, with original songs by Timothy Edward Smith and Hunter Nolan. Whether you find the gags funny depends a lot on your relationship with the film -- fans will follow the humor easily, while I imagine anyone who isn't well familiar with the series is likely to be lost.

Some of the gags, especially involving John Rachlin's Darth Vader and Christopher Todd-Waters as C3PO, are very successful; others, like Han Solo (Ryan Mulholland) declaring that he has a "case of the Mondays" are a bit too corny, even for goofy comedy. The show actually works best when it's not trying to be funny -- an original "filler" scene featuring Princess Leia (Maria Leonetti) in her cell after her planet has been destroyed, the confrontation between Obi-Wan (Shaun Yates) and Darth Vader, and the Rebel Squadron's climactic mission, are definite highlights. The laughs are there, though -- my 12-year old son laughed throughout. The show features some stellar vocal talent, but at the end of the day, this is a show geared toward Star Wars fans before lovers of musical theater.