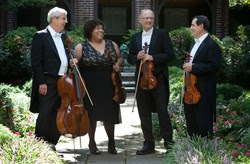 Janet Jackson Witman, harpist, was guest artist at Sunday’s Copeland Quartet concert at the Church of the Holy City. Ms. Witman played Aria in classic style by Marcel Grandjany in a version for harp and string quartet. Grandjany, a French harpist who emigrated to North America, wrote this as a concert etude to show the exploits possible with arpeggios on a harp. Ms. Witman executed the arpeggios with clarity, dexterity and a lyrical but gentle sound that resounded in the small church. Since every pew was full, there was little reverberation, yet harp sounded quite clear even in the back pews.

The next piece Ms. Witman chose was a piece that the Pleyel company had commission of Claude Debussy, Danses pour harpe chromatique. As orchestral parts for the harp began to include more and more chromatic passages, Pleyel tried to develop a harp with two sets of strings so the harpist would not need so many pedal changes. Unfortunately, the harpe chromatique did not win over the world of harpists and, like Ms. Witman, they had to learn to make incredibly fast pedal changes rather than deal with so many strings.

The quartet had been more of an accompanying orchestra for the harp in the first two pieces, but the Beethoven ‘harp quartet’, (String quartet No. 10 in E-flat major, opus 74), showed us they were quite capable of taking on more prominent roles. The players gave each voice its own character in Beethoven’s very long coda at the end of the first movement, providing a harmonic balance and shaping each chord with great musical sensitivity. The adagio ma non troppo second movement was a vehicle to show all of the melodic nuances of each of the four instruments – with the presto demanding their precision and alternating and exchanging of melodic phrases with seamless timing and matching lines. For four musicians to trade off a phrase and have it sound as if one person planned the slurs, intonation and dynamics is quite a feat, but nothing compared to their brave finale at the end of the allegretto con variazioni.

They will be at the Church of the Holy Trinity on April 1 or you can hear them by buying one of their two CDs.