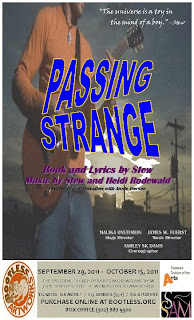 Stew, the creator/subject of Passing Strange, and collaborator Heidi Rodewald chose just five theater groups in the US to perform the stage version of the show this year; Wilmington's Bootless Artworks was one of them. Still essentially homeless (they are taking up in The Episcopal Church of Saints Andrew & Matthew in downtown Wilmington for this show), Bootless continues to show that they're a major force in Delaware theater.

My last Bootless show was The Pillowman, an incredible, and incredibly dark, comic piece put on in an empty outlet store on the Riverfront. Passing Strange is positively light in comparison, but the journey is deep and real.

Directed by Malika Oyetimein and James W. Fuerst, the musical is narrated by Stew (Jerry Rudasill), who introduces his teenage self (Cory Hindorff) and his mother (Cherie Jazman), a comfortably middle class black family in Los Angeles. She drags him to church, where he finds after-hours inspiration from the secretly free-spirited choir director (B.K. Elam) who never left home. His punk band flounders, and, terrified of never moving past his neighborhood, he leaves his mother for Europe -- and the promise of creative freedom, sex and drugs. The farther he gets from home, the farther he gets from himself, until his life is a performance of "passing," gaining acceptance from a group of German radicals by using his non-existent ghetto street cred. Humorous, yes, and also quite poignant. The Narrator was shaped by the choices made by his naive young self, but it wasn't without loss.

Hindorff is a star. And by that I don't just mean the star of this production, which he is, but a star, period. It's what I thought when I saw him in Cats at NCT in January, and my feeling has only been reinforced with Passing Strange. The ensemble includes four actors who take on triple roles as characters in LA, Amsterdam and Berlin -- Candace Thomas, Kori Beaman, Keith Wallace and B.K. Elam -- all of whom transformed dramatically and convincingly throughout.

The show features a live band, which was one of the main concepts of the original version, Travelogue. On preview night, the band sounded great, but at times drowned out the stage performers. Hopefully, the sound issues have been resolved.