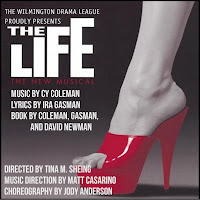 The Wilmington Drama League opened its 2011–12 season with the Cy Coleman Broadway musical, The Life. The show chronicles the trials and tribulations of prostitutes and pimps in New York City the early 1980s—in those days before Disney and chain restaurants reformed 42nd Street and families began visiting the city again.
Watching the production, directed by the incomparable Tina M. Sheing, I realized how much prostitutes and everyday people actually have in common in the workplace.  Sure prostitutes might not have offices like a high-powered lawyer or executive, but they deal with the same pressures — contending with sexual harassment, working long hours, having coffee (or beer) breaks cut short.  In addition, there are the everyday stresses all people confront in their personal lives — balancing careers and relationships, worrying about getting older, wanting to be loved.  I’m sure all people can relate to at least one of these issues.
Although I was thinking about these similarities during the show, it didn’t stop me from enjoying the action on the stage! I was entertained by the show’s R&B and gospel–inspired musical numbers brought to “life” under the music direction of Matt Casarino.  The terrific performers, many in heels, brought dance numbers alive with some Fosse-esque choreography by Jody Anderson.
I must admit I loved listening to the lead prostitutes, best friends Queen (played by Sharon Brown Ruegsegger) and Sonja (played by Rebecca Gallatin), sing duets. By themselves their voices were strong, but combined they soared!  I also loved that Ms. Gallatin’s look was reminiscent of (get ready for a retro reference) Nancy Allen in Dressed to Kill.
The Life might have ended its run (closing night was October 2), but WDL is ending their season with another show of similar working girls – The Best Little Whorehouse in Texas (May 4-19, 2012)!  And, I must admit I’m looking forward to their upcoming production, Barefoot in the Park (October 28-November 12)…One of my faves!
See www.wilmingtondramaleague.org.
Posted by Arts in Media
Email ThisBlogThis!Share to TwitterShare to FacebookShare to Pinterest