NINE is a Winner 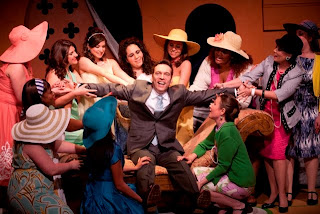 City Theater Company has a winner with NINE, a musical by Arthur Kopit (book) and Maury Yeston (music and lyrics). The character Guido Contini is loosely based on Federico Fellini’s autobiographical character in the movie 81/2. A wonderfully humorous-and sometimes sobering journey into the troubled filmmaker’s psyche, the production is crisp and vibrant. Director Michael Gray assembles a terrific cast and makes creative use of the black box space. The small orchestra, led by Chris Tolomeo, aces the difficult score, which ranges from jazzy numbers to baroque-style recitative.

Guido (Michael Gray) is a simpatico, self-absorbed womanizer. When he sings Only with you, he caresses his wife and his mistresses with tender words of faithfulness. As his career is foundering, he finds himself under the thumb of his producer, Liliane LeFleur (Karen Murdock). She constantly badgers him for a script and hires her lover-who despises Contini’s work-to be his assistant. Murdock is terrific in the role with her show-stopping Folie Bergeres and pompous French attitude.

The all-female ensemble functions a sort of Greek chorus. They echo Guido’s thoughts and gush with the admiration he so desperately craves. As Guido’s mother, Ruth Bailis is convincing and her Italian accent and mannerisms authentic. With her strong presence and rich voice, TS Baynes is ideally suited for the role of Guido’s neglected wife, Luisa Contini. As she sings Be on your Own we feel the depth of her suffering and sense of abandonment. Eleonore Thomas is vocally and dramatically riveting as Saraghina. She sings Ti Voglio Bene/Be Italian to the young Guido (Nolan Moss), coaching him on matters of love and sex. Moss does an excellent job in the role of the young boy, both overwhelmed and intrigued by the powerful female forces that surround him. Also entertaining were Corinne Grosser (Claudia Nardi) and Ashley Harris (Carla Albanese) as Guido’s two mistresses.

Though much of the music light-hearted and often silly, Yeston builds some very complex, layered songs. For each character he creates unique musical themes, which weave together nicely into larger ensembles. The Bells of St. Sebastian is a haunting, rich first act finale. The songs also serve as a vehicle for character development. In Luisa’s My Husband Makes Movies the veneer of her denial is shattered, and by the end of the song her distress is more exposed.

Be sure to check out this gem, which runs through May 21, 2001 at the Black Box at OperaDelaware.